Wilson Shoots 62 to Lead at Southerness 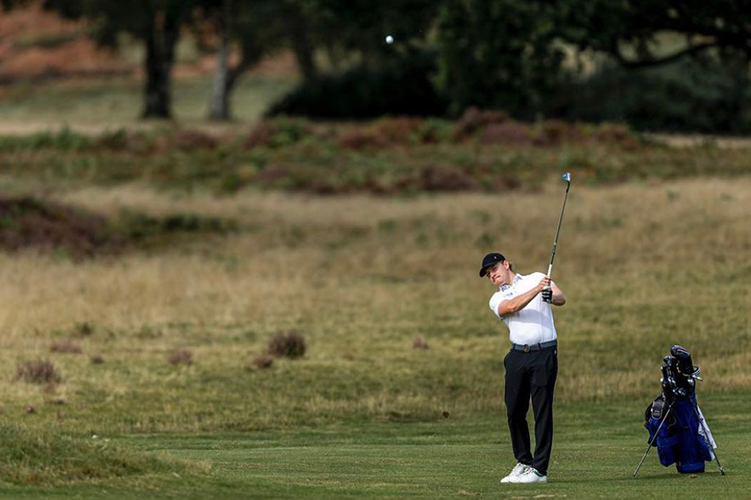 England’s James Wilson carded a superb seven under par 62 to storm into the lead after the first round of the Scottish Men’s Open Championship at Southerness.

Wilson began his round with birdies on both the 450-yard par four second and 461-yard par four third. He dropped his only shot of the day on the short fourth but further birdies on the fifth, sixth and ninth saw him reach the turn in four under par 31 and he went on to add two more birdies on the 13th and 14th before edging in front with a four on the 533-yard par five 18th hole.

The Geordie believed his driving was the key to his exceptional round.

“I kept in on the course of the fairway,” he said. “I hit most of the fairways and after that, the iron shots become a lot easier. I putted well too. I holed pretty much everything inside 8-10 feet which obviously helps.

“I can’t quite remember the last time I went out and left nothing out there. This was one of them days when I might have been one shot better, but possibly not even that.

“It was just nice to be out in a competitive environment again,” he added. “The last time I played competitively was last August at the Brabazon (Trophy) so it’s good to get out there again. Hopefully, this season is going to be a bit more routine than the last one.”

Barrow, from Royal Lytham and St Annes, had his putter to thank for a 63 that included seven birdies and just one dropped shot on the 175-yard par three 17th hole.

“I didn’t hit it very well off the tee,” he admitted. “I think I only hit about four fairways which wasn’t ideal, but my iron play was pretty good, and I holed my fair share on the greens.

“The conditions were perfect,” he added. “I’ve just got to stay patient and see what tomorrow brings.”

Easton, from Irvine, opened with a birdie on the first and made further advances on the fifth, ninth, 11th and 15th before completing an impressive bogey-free round with his sixth birdie of the day on the 18th.

“It was a good day,” he said. “Obviously, it was nice to play this place in a relatively flat calm. That’s rare in these parts, so it was nice to take advantage of it and shoot a low one. That’s always fun.

“You can’t win it in the first round, but you can put yourself in a good position. I just wanted to stick to my game plan, hit the smart shots and I did that pretty well. It was a nice round. I saved myself a couple of times with the putter, so it wasn’t perfect, but that’s what you have to do.

“I managed to pick off some birdies towards the end too which is always nice.”

The best shot of the day came from Irishman, Patrick Keeling, from Roganstown, who aced the 217-yard par three 15th hole with a two iron. He went on to chip in for a birdie on the 16th on his way to posting a two under par 67 that left him in a share of sixth place alongside Scotland’s Jack Broun (Turnberry), Gregor Graham (Blairgowrie) and Andrew Benson (West Lothian), their Australian-based compatriot Josh Greer (Joonalup) and Englishman Harvey Byers (Walton Heath).

George Burns, the 2019 Scottish Men’s Amateur champion from Crail, is part of the large group on one under par 68.

The Scottish Men’s Open Championship is staged over four rounds of stroke play with the field of 144 being cut to 40 and ties after two rounds and the last two rounds being played on the final day.

All scores from the 2021 Scottish Men’s Open Championship will be registered by players on the course using the new Scottish Golf App. This means that live scores from Southerness will be available for everyone to follow on the Scottish Golf website.