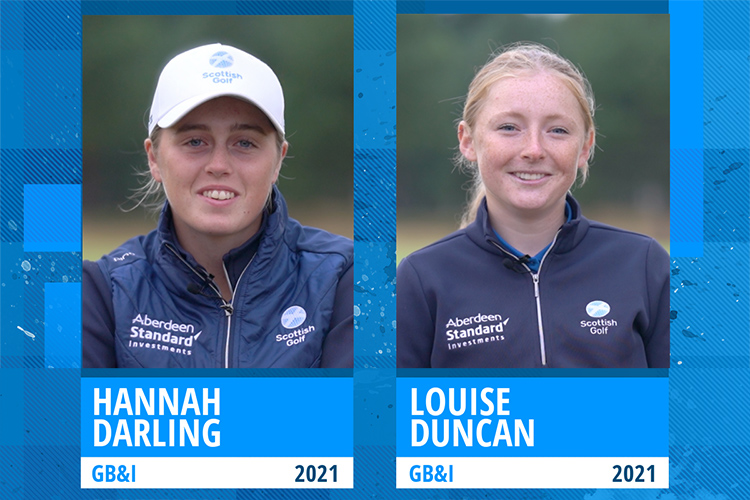 Hannah Darling and Louise Duncan have been named in the Great Britain & Ireland team to face the USA later this month in the Curtis Cup at Conwy Golf Club in Wales.

The two Scots will be joined by England’s Annabell Fuller, Charlotte Heath, Caley McGinty and Emily Toy and Ireland’s Lauren Walsh and Annabel Wilson for the match on 26-28 August. The travelling reserves are Scotland’s Hazel MacGarvie and Ireland’s Julie McCarthy.

University of Stirling Sports Studies student Duncan, 21, playing off +5 from West Kilbride Golf Club, goes into the match against the Americans as the British champion having won the Women’s Amateur Championship at Kilmarnock (Barassie) in June.

Subsequently she finished tenth in the Helen Holm Scottish Women’s Open Championship at Troon Portland, was a key member of the Scottish team that reached the semi-final of the European Ladies’ Amateur Team Championship at Royal Co. Down and also represented her country at last week’s Women’s Home Internationals at Woodhall Spa.

As winner of the Women’s Amateur Championship, Duncan will also compete in the AIG Women’s Open at Carnoustie the week before the Curtis Cup.

Hannah Darling, 18, from Broomieknowe, has been one of the most consistent performers on the women’s amateur circuit this season having won the St Rule Trophy at St Andrews, finished joint runner-up at the Helen Holm Scottish Women’s Open and reached the semi-finals of both The Women’s Amateur Championship and the Scottish Women’s Amateur Championship.

She led the stroke play qualifiers at the European Ladies’ Team Championship in Northern Ireland and was her country’s top points scorer in the Women’s Home Internationals in Lincolnshire.

“Everyone at Scottish Golf is delighted that Hannah and Louise have been selected to represent GB&I at the Curtis Cup and we look forward to cheering on the team at Conwy,” said Scottish Golf’s Head of Performance, Clare Queen.

“It’s a strong squad of players and we wish Elaine Ratcliffe and her team the best of luck in their bid to win the Cup back from the USA.

GB&I go into the Curtis Cup bidding to regain the trophy they lost at Quaker Ridge in 2018. They defeated the Americans on both of the last two occasions the match was played on home soil – at Nairn in 2012 and Dun Laoghaire in 2016.

“It is a great honour to be chosen to represent Great Britain and Ireland and competing in the Curtis Cup is the pinnacle of the amateur game for these players,” said GB&I captain, Elaine Ratcliffe.

“Home matches have been very successful for GB&I in recent times and this year we have selected a highly skilled and talented team which is focussed on winning back the trophy on home soil. I know that they will enjoy the opportunity to compete together and create memories and friendships that will last a lifetime.”