Two Scots and an Englishman share U16 Boys’ First Round Lead 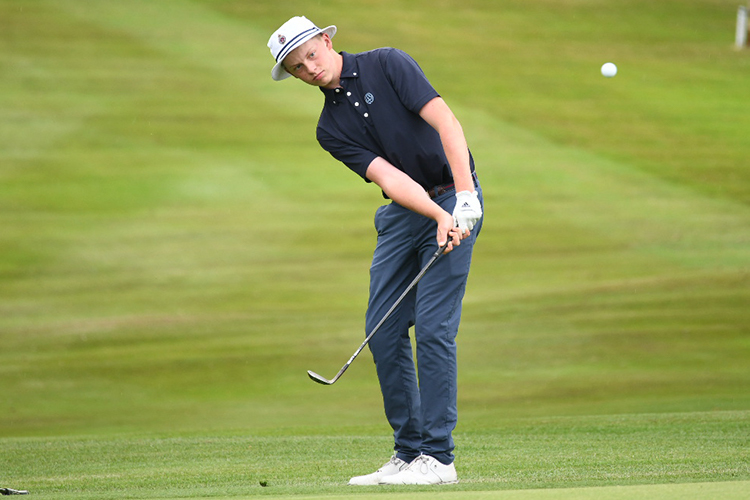 Scotland’s Niall Shiels Donegan carded three birdies in his last five holes to climb into a share of the lead after the first round of the Scottish Boys’ Under 16 Championship at Dumfries & County.

Donegan, who lives in California, and is the son of golf writer and former Lloyd Cole and the Commotions bass guitarist Lawrence Donegan, dropped back to two under par with a bogey on the 13th but birdies on the 14th, 15th and 17th saw him repair the damage and finish the round in five under par 64.

He goes into the second round tied alongside playing partner and fellow Scot Sam Mukherjee, a member of Gullane Golf Club in East Lothian, and English Boys’ squad member Josh Berry from Doncaster.

“I struggled with my pace on the greens on the front nine but holed most of the putts I looked at after that. It’s a great way to start.

“We’re off early tomorrow so I’m going to try to get to bed as early as I can and be ready to go again.”

“I hit my irons great all day and kept sticking it close,” said Mukherjee, one of three brothers in this week’s field. “Niall and I were both playing well and I think that helped us both.”

Berry briefly held the lead on his own when he carded his sixth birdie of the round on the par-three 14th before dropping back alongside his two Scottish rivals with a bogey on his penultimate hole.

“I played good, my course management was good, and my putting was decent,” said the Englishman. “I’m ready for the next couple of days.

“The course was good and so was the weather,” he added. “We had a little bit of rain but nothing too major. I think we got a little bit lucky with that. Yesterday, the forecast was looking horrendous, but we got away with it.”

The three leaders go into the second round one shot ahead of a Scotsman, Harry Bent, a club colleague of the Mukharjee brothers at Gullane, and a second Englishman Jake Antoun, from King’s Hill, Kent.

Hugh Adams, the 2019 Scottish Under 14 champion from Hagley, gave himself a great chance to claim a second Scottish title after securing sixth place with an opening three under

par 66 while two other Englishmen, Dylan Shaw-Radford and Junior Dobson are in a tie for seventh place on 68.

Scotsmen Calum Dawson, Dylan Cairns and Aidan Lawson and Englishmen McKenzie Lewis and Oscar Lent round out the top ten in a tie for ninth place on level par 69.

A second Mukherjee brother, Oliver, is part of the large group sharing 14th place on 70 but it was not a day Connor Graham, from Blairgowrie, the current Scottish Boys’ Order of Merit leader, will want to dwell on for long. He was five over par after his opening three holes before using all his resolve to post a battling 74.