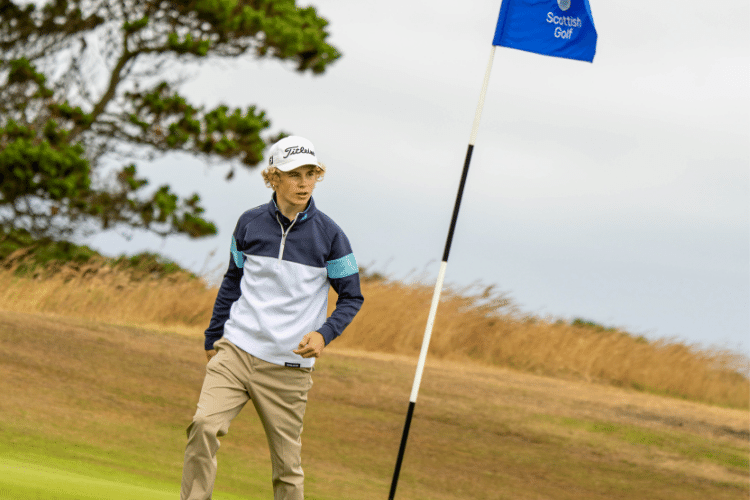 Number one seed Ben Murray survived tough conditions to battle his way through to the third round of the Scottish Men’s Amateur Championship at Murcar Links.

On a day when the wind became a serious factor for the first time during the week, the Portlethen player beat Nairn’s Hamish Mccolm 3 & 2 in the first round and then overcame Aldeburgh’s Gregor Tait by the same scoreline in the afternoon.

Those statistics tell part of the story but what they do not show is that Murray was three down after six holes against Tait and needed all his battling qualities to prevail.

“Gregor is a fantastic ball striker,” he said. “One of the best I’ve played against. The birdie I made on seven was crucial and fortunately he made a few mistakes after that and let me back into the game.

“My main objective this week is to keep the mistakes to a minimum and I did that pretty well considering the conditions were the toughest we have faced all week.

“This has been a big few days for me,” he added. “I’ve struggled mentally for the last five years wondering if I was good enough to compete at this sort of level. But sharing first place in the qualifying and then getting through two rounds today gives me a lot of confidence.

“It’s a big step forward for me,” he added. “Everything from now on is a bonus although I’d like to go further if I can.”

Murray’s next opponent will be Blairgowrie youngster Connor Graham who beat Murray’s club-mate Graham Innes 3 & 2 in the morning but then had to go all the way to the 21st before ending the challenge of Stephen Roger from Peebles in the afternoon.

Graham was recently selected for next week’s Home Internationals at Woodhall Spa. He was supposed to be taking part in a team training day at Ladybank tomorrow (Friday) but now has other business to attend to before making the long journey south to Lincolnshire.

“It was quite challenging with the wind and that but I managed to play quite well and hit good shots at the right time,” he said.

“It’s great to get through.”

Nairn’s Calum Scott and Glenbervie’s Ross Laird were also due to be taking part in the same session but will be making their apologies after progressing to last 16. Scott beat Duff House Royal’s Lewis West in the second round and will now face Andrew Davidson from the Crail Golfing Society. Laird made it through to the same stage by beating Airdie’s Dominic Dougan by one hole. He is now up against Connor Wilson from Castle Park for a place in the last eight.

In the first round Dougan had caused something of an upset when he beat number two seed Josh Greer on the fourth extra hole after boarding the 18th tee one down.

The biggest win in the second round came from Auchterarder’s Rory Franssen who went to the 17th in the morning before beating Millport’s Craig Pirie but then dispatched Shaun Hedger from West Kilbride by 7 & 6 in the afternoon.

Franssen now plays American-based youngster Niall Shiels Donegan who continues to impress after a one hole victory over the highly rated Ben Carberry from Falkirk in the afternoon.

“I got off to a really good start,” Franssen said. “I was three under through four and from there I just tried to keep it in a straight line.
“It was playing a lot harder than the first couple of days.

“The tee shots on the front nine were much more challenging. You had to hit a three wood or a hybrid instead of banging a four iron down there and that still left you with a much longer shot into the green.

“Holes that previously you were looking to make birdie on were suddenly tough to make fours. I’m delighted to get through.”

2019 champion George Burns is likely to be sharing that sentiment after a hard-fought second round match against Anthony Bews from the host club. Bews was two up after ten before Burns battled back and progressed to the last 16 with a birdie out of a greenside bunker on the 19th hole.

His bid to become the first player to defend the title since Charlie Green in 1983 continues with a third round match against fellow Scottish international Darren Howie from Peebles.

“My nerve endings are destroyed after that,” said Burns. The last 16 sounds good though. It’s always a bonus to get to this sort of stage and anything can happen from now on.

“I’ll eat some food, get some sleep and then go again in the morning.”

The draw for the second day of the match play can be found here.