The Long Wait is Over for Perth & Kinross 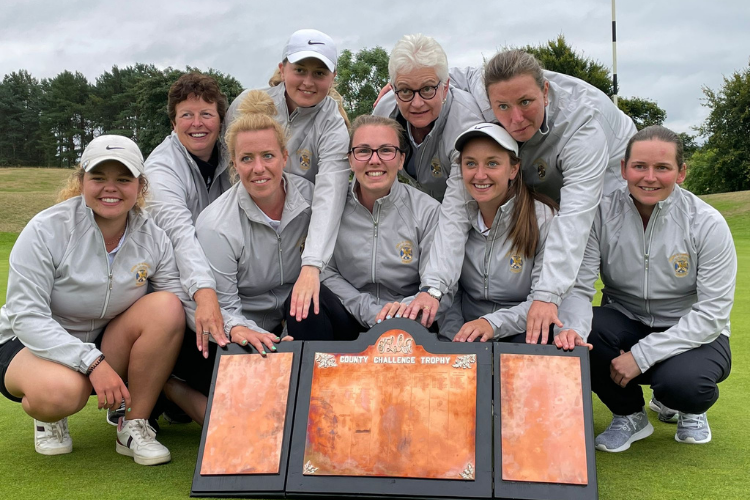 Perth & Kinross won the Scottish Women’s County Finals for the first time in almost 70 years with a commanding display across three days in the 2021 championship at Forres.

They started the event with a 5 ½ – 3 ½ victory over Dunbartonshire and Argyll and then thrashed a North Invitational side 8-1 before clinching the trophy for the first time since 1953 with a resounding 7 ½ – 1 ½ win over Midlothian.

The victors ended the event with a total of 21 points from their three matches which was six and a half more than Dunbartonshire and considerably more than double the points third-placed Midlothian could muster. They won 20 of the 27 foursomes and singles matches they contested and halved two of the other seven.

The top points earner for the winning Perth & Kinross team was Katy Alexander from Blairgowrie who emerged with four and a half points out of five but it was the team’s superior strength in depth which was the secret to their success.

All eight of their players contributed to the victory with Aberfeldy’s Isla Moncrieff claiming a one hundred percent record with four points from her four starts. Dunfermline’s Jennifer Saxton accumulated four points in the five matches she played in while Eilidh Watson from the St Regulus club amassed the same total from her six starts. Blairgowrie’s Megan Ashley and Muckhart’s Laura Walker both claimed three and a half points out of five while there was also an effective cameo performance from captain Jillian Milne who won both the matches she played in on the second day. Whitemuir’s Laura Campbell contributed one and a half points out of four to the team’s cause.

“It has been absolutely brilliant,” said winning captain Milne, from Blairgowrie. “The team spirit has been fantastic and I couldn’t be happier for them all. They deserved everything they got. Today the birdie putts were dropping like confetti.

“It’s has been a real team effort with everyone contributing points. We’ve always had good players but in the past lacked a bit of strength in depth. That’s certainly not the case now so hopefully it won’t be another 68 years before we win again. I’m sure it won’t be.

“It has been a fantastic few days for all the teams,” she added. “All the games were played in great spirit. I think that after what we’ve been through the last year and a half we’re all grateful to be back playing some competitive golf again. We’ve all been determined to have some fun.”

In the other match played on the final day Dunbartonshire and Argyll sealed second place with a narrow 5-4 victory over the North Invitational team. Milngavie’s Lorna McClymont’s halve in the top singles against Carrine Taylor meant she emerged from the three-day competition with five and a half points out of six. Team-mate Fiona Rattray from Douglas Park amassed 4.5 points out of 5.