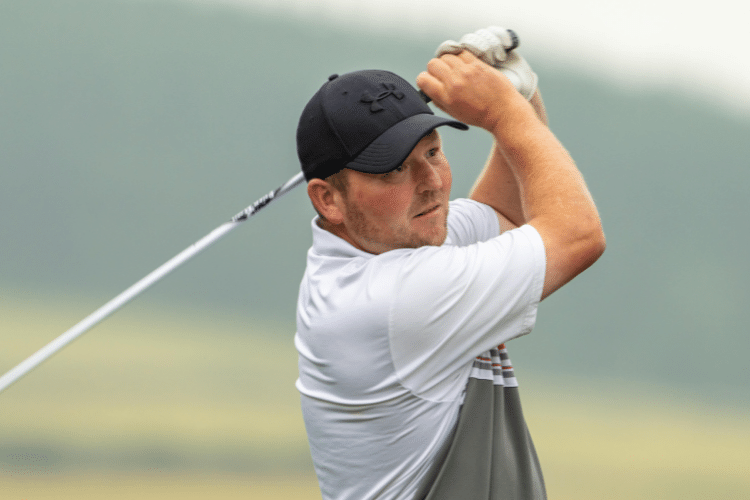 Clydebank & District’s Steven Stewart eagled the last to take a two-shot lead after an incredible first day of scoring at the Scottish Men’s Amateur Championship at Portlethen and Murcar Links.

Stewart returned a nine under par 63 at Portlethen which sees him go into his second round at Murcar Links two shots ahead of Leven Thistle’s Scott Crichton, Irvine’s Stuart Easton and local Portlethen member Ben Murray.

Stewart started his round with three straight birdies but it was on the back nine that he came into his own. He birdied the 11th and then fired four more in succession from the 13th before holing out from twelve feet for an eagle on the last to set a new Portlethen course record.

“To be honest I didn’t even realise I was that many under par,” said the first round leader. “When you are entering your score on an App you don’t pay attention to it. It was only when someone told me that I realised what I’d shot.

“I’m happy. I still don’t really believe it. It was brilliant out there. I really enjoyed it.”

Stewart was not the only competitor who will remember their first round for quite some time to come.

Playing partners Murray and Crichton also had a day they will never forget after posting their 65s in perfect conditions and then admitting they had inspired each other all the way round.

Nor were they alone because their other playing partner Duncan contributed a 67 meaning their three-ball was a cumulative 19 under par for the round.

“It was brilliant,” said Murray. “We kind of fed off each other out there. We were pretty solid from the get-go. I was a bit more aggressive. Scott was a little more conservative which just goes to show there’s more than one way to play this course. It was great fun all the way round.”

“Playing with a local member today definitely helped,” said Crichton. “There were a couple of lines off the tee I wasn’t sure about but I watched Ben and then was able to commit to the club I was using. It was a pretty good round of golf for us and it wasn’t bad for Liam either. He shot five under so we definitely got each other going.

The weather was more or less perfect for us,” he added. “We looked at the weather forecast this morning and were thinking thunder delays and things like that but in the end it couldn’t have been much better. The course was also in great nick. The greens held up really well considering the traffic on them.”

Easton set an early pace which at the time seemed unlikely to be beaten. He also got off to a dream start by carding four birdies in an opening half of 32. He dropped his sole shot of the day on the short tenth but then birdied the 13th, 14th, 15th and 18th to post the early mark.

“I holed from about 20-feet for a birdie on the first so that was a nice way to start,” he said. “I missed a couple but also holed a few more good ones which you’ve got to do to shoot 65.”

“I played smart golf. I played the course for the first time yesterday and that definitely helped. I’ve played Murcar a few times and know it will be a very different test.

It’s very firm at the moment,” he added. “I’ll need to hit some good shots tomorrow and maybe get a few breaks with the bounces as well. I’m looking forward to it.”

The best scores of the day at Murcar Links came from Kilmacolm’s Matthew Clark, Castle Park’s Connor Wilson and Thornhill’s Taylor Kerr who carded rounds of 67 over the par-71 links to join the group on four under also including Royal Troon’s Michael Smyth, Matthew Wilson from Forres and Scott Mccandless from Bathgate.

One of the most dogged rounds of the day came from defending champion Burns. The 2019 champion at his then home club Crail began his bid to become the first player to defend the title for 38 years at Portlethen with a bogey at the first and a double-bogey at the second before an eagle on the fourth and birdies on the fifth, sixth and ninth saw him reach the turn in three under par 33. He dropped another shot on the tenth but then completed his recovery with birdies on the 13th, 16th and 18th to join the group on five under par.

All competitors switch courses for the second round of stroke play with the top-64 qualifying for the subsequent match play competition.