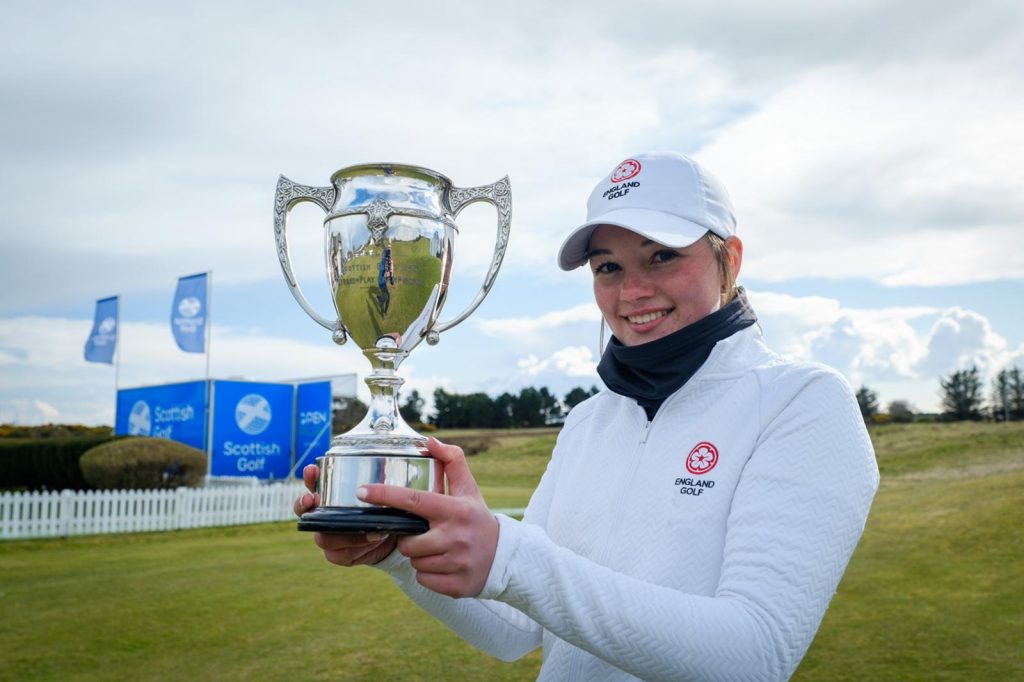 From early in the second round, Gourley and Gollan pulled away from the field with fast starts, with both players -3 for their round after six holes.

The lead changed hands a few times over the course of the afternoon, but with Gourley leading by one after 14 holes, Gollan made a crucial birdie on the 15th to draw level at the top.

After a pair of pars on the 16th, it all came down to the final two holes.

The big moment came on the 17th, as Gollan dropped two shots with a double bogey, while Gourley made a solid par to take an advantage down the last.

Gourley was able to make that narrow advantage count, parring the 18th to secure the title by two shots.  The par on 18 saw her sign off with a fantastic final round of 68 (-4).

Talking to Scottish Golf shortly after holing the winning putt, an ecstatic Gourley said, “It’s an amazing feeling, I played well all week and knew it was going to be tough with the conditions.

“I was playing with Philipa today which meant I knew what I was going to have to do.  It was just about keeping calm and trying not to make too many mistakes.

“This means the world to me; it has been a goal of mine for years and to have finally done it feels amazing.

“These are some of the best players in the world, and to know I can still perform under those conditions and those pressures is a good feeling.”

“The course was in amazing condition, especially for the time of year, it’s been a really good week.”

On a day of impressive scoring, Ireland’s Rebekah Gardner posted the low score of the week, with a stunning round of 67 (-5).  After opening with a bogey, Gardner went on to make six birdies, including five in the space of seven holes on the front nine.

After posting the low round of the week, Gardner said, “The past two days have been tough, so it was great today to get out and shoot under par and have a good end to the tournament.

“The wind died down a bit today, but there were still some holes that were really tough out there today.”

Top-Scot this week was Grace Crawford who battled hard to a top-10 finish, with a final round of 73, including a birdie at the last, seeing her finish in 9th place.

Day 1 leader Roisin Scanlon was the under-16 winner, finishing on level par for the week and third place overall.

Dylan Shaw-Radford came out on top in tough conditions at Murcar Links Golf Club to claim the title of 2022 Scottish Boys’ Open Champion.

As the afternoon round got underway, it was England’s Shaw-Radford who sat top of the leaderboard on -2 following an excellent second round of 69, with a two-shot advantage over Joe Jones and Connor Graham.

Jones and Graham had both reached -6 and -7 for the tournament during round 1, but tough conditions saw them fall back to level par by the end of the round.

However, six dropped shots for Shaw-Radford in his opening eight holes in the afternoon saw him fall behind. After dropping a further shot at the 11th, Shaw-Radford steadied the ship with four pars to sit +5 for the tournament and in the lead with Jones and Graham falling to +5 and +6 at the same time, albeit earlier in their rounds.

The tough conditions brought several players back into the mix with Daniel Bullen, Joe Sykes and Charlie Croker all getting to within two of the lead.

As all players entered the back nine, Shaw-Radford followed up his run of pars with a crucial birdie on the 16th to hold a one-shot lead with just two holes of his round to play.

With pars at 17 and 18, Shaw-Radford finished the tournament at +4, leaving the players still out on the course too much to do to catch him.  Joe Jones did manage to get back to +4 after a birdie on 14, but a bogey on the 17th saw him fall one short of a playoff.

Speaking to Scottish Golf, a delighted Shaw-Radford said, ‘I feel great  – it was hard, especially with the wind and I made an early double-bogey so I wasn’t sure if I was in front or behind, but I managed to keep it together. I just tried to keep it in play, low tee shots, keep it on the fairway. It means a lot to start the season off well. I put a lot of work in this winter, so it’s great to see it pay off.’

Winner of the under-16 section of the event was England’s Charlie Croker, tied on +6 with Scotland’s own Connor Graham, but who pipped with a better final round gross score of 74 to Graham’s 77.