Rudgeley Fires Low Round of The Day To Win Helen Holm 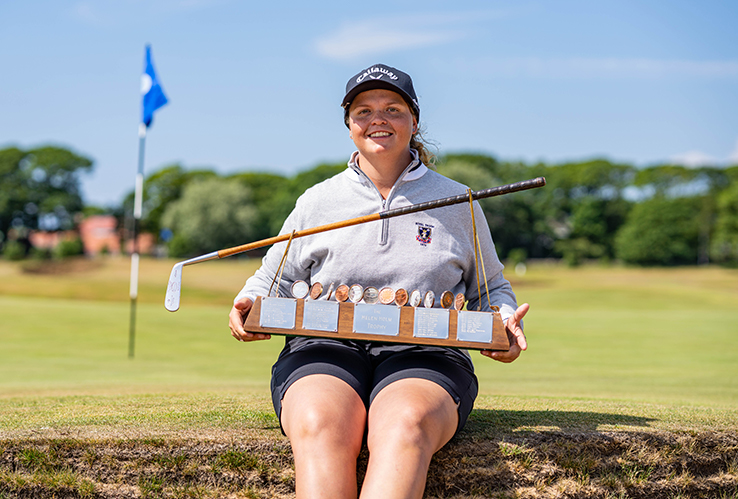 Kirsten Rudgeley carded a closing six under par 66 to storm through the field and become the first Australian to claim the Helen Holm Scottish Women’s Open title.

Rudgeley, from Perth, Western Australia, started the final round at Royal Troon Portland Course four shots off the pace set by Scotland’s Hannah Darling but she quickly got in her stride with birdies on the third and fifth before vaulting into the lead with further birdies at the 11th, 15th and 16th.

A sixth birdie of the day on the 18th saw her complete a bogey-free round and in the end her 12 under par 204 aggregate was enough to claim a one shot victory over Darling and 2019 Women’s Amateur champion Emily Toy from England.

It also meant that Scotland’s long victory drought in this championship was extended by another year.

It is now some 19 years since Heather Stirling became the last Scot to lift the Helen Holm trophy all the way back in 2002.

“It feels awesome,” said the new champion who is making a habit of collecting silverware having won three times to date this season on her domestic circuit Down Under. Those results have seen her rise to a high of 166 on the Official World Rankings and she is likely to go higher after her maiden success on the international stage.

“Getting an international win was definitely on my bucket list and to my name on such a great trophy means a lot.

“I did feel good coming into the last round. I knew I needed a low one and I was able to do it so that’s great.

“I drove the ball straight and holed a few good putts when I needed them. That’s what you have to do and that’s what got me over the line.

I wasn’t actually looking at leaderboards,” she added. “I just knew that if I birdied this or eagled that I would have a good chance.

“Winning is always awesome but claiming an international victory means even more.”

For much of the closing afternoon recent St Rule Trophy winner, Darling had been Rudgeley’s closest challenger but a dropped shot at the 16th left her with a lot to do and even a birdie at the last was not enough to make up the deficit. That reversal adds to a run of near misses since winning at St Andrews having lost out at the semi-final stage at both the Scottish Women’s Amateur and the Women’s British Amateur.

Darling’s closing one under par 71 saw her drop into a share of second place with Toy who eagled the last to card a 69 and finish a single shot ahead of Toy’s English international team-mate Charlotte Heath who shot a 70.

Local Royal Troon member Hazel MacGarvie also posted a 70 to finish in fifth place on eight under par while Scottish Women’s Amateur champion Chloe Goadby carded a 74 to drop from second to sixth.

England’s Amelia Williamson carded the second lowest round of the day with a 67 to finish seventh on 210 but it also proved to be a bad day for former Scottish champion Clara Young and new British champion Louise Duncan.

Young bogeyed the 16th and 18th to card a 74 and slip down into eighth place alongside Murcar’s Jasmine MacIntosh while Duncan saw her bid to win back-to-back international titles disappear after carding a closing 75. That resulted in her dropping into tenth place on the leaderboard on 213.