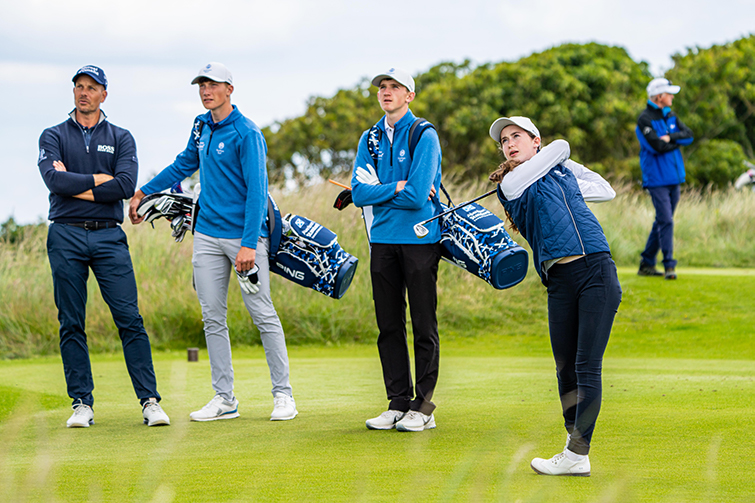 Three young Scottish golfers have experienced the thrill of a lifetime by playing a round with former Open champion Henrik Stenson during the 2021 abrdn Scottish Open pro-am.

14-year-old Grace Crawford, 17-year-old Ruben Lindsay and 17-year-old Calum Scott were given an insight into the challenges of golf at the highest level teeing it up alongside Stenson who has featured in five Ryder Cups and won 21 times around the world during his illustrious career.

The young trio, who are all part of Scottish Golf’s Performance programme, played 18 holes with Stenson to represent the Scottish Government and VisitScotland’s support of the tournament at the Renaissance Club in East Lothian.

Stenson, who also plays an active role in the development of junior players in Sweden, said: “The next generation of golfers are our future. I’ve got to experience so much through the game so of course I wanted to give back and give others the opportunity to do the same. It was one of the first pro-ams I’ve got to play with a junior group and I really enjoyed it. All three are great ambassadors for junior golf and great players with lots of potential. I tried to give them a few pointers and hopefully they’ll take up on that and come back even better players in the future.”

Grace, who plays at West Links Junior Golf Club in North Berwick, said: “The experience was unreal. It has been such a great opportunity and I have taken so much away. It has been a great day from start to finish.

“It definitely ranks really high in my golfing career and I just want to say a massive thank you to everyone involved in giving us this excellent opportunity.”

Ruben, from Turnberry Golf Club in Ayrshire, said: “It’s was great to see a European Tour golf course. I’ve played it before but I’ve not seen how it’s set up for an event like this where the best players in the world will be playing. It’s a great experience how they set up the course and I’m looking forward to watching them on TV trying to score round it.”

“There is lots to take away today, I definitely will remember it forever, it will be a lifelong memory.”

Calum, of Nairn Golf Club in the Highlands, said: “I will remember this for a very long time. Playing alongside Henrik was very good, we got some nice advice from him as we played round The Renaissance. He strikes the ball really well and it was great to see him play.

“It really was a once in a lifetime experience. I would like to say a massive thanks to VisitScotland, The Scottish Government and Scottish Golf for the opportunity, it is something I would do again in a heartbeat.”

Karin Sharp, Chief Operating Officer of Scottish Golf, said: “It is a great opportunity for these young players. It aligns with the wider approach we try to take with our performance players at Scottish Golf where we look at wider input and opportunities such as taking part in events like this to learn, grow and fulfil their ambitions as players.”

“There are lots of technical skills that coaches can help them with but to have the opportunity to come and play in an event such as this and to speak with an Open champion like Henrik Stenson gives them a completely different perspective and hopefully some really valuable insight to develop them as individual golfers.

“We’d like to thank VisitScotland and the Scottish Government for the invaluable experience for some of our most promising talent coming through the Scottish Golf performance programme.”

Paul Bush, Director of Events at VisitScotland, said: “The abrdn Scottish Open is an event which does so much to boost Scotland’s profile as a world-class golf tourism and events destination around the world but it also delivers significant benefits closer to home as well.

“The opportunity for Grace, Ruben and Calum to experience playing alongside someone of Henrik’s calibre is something that will stay with them forever and hopefully be of great benefit in their own development as golfers.”

VisitScotland and the Scottish Government’s commitment to the abrdn Scottish Open is part of the country’s investment in golf events, including The Open, AIG Women’s Open, Trust Golf Women’s Scottish Open and The 2019 Solheim Cup, to support the promotion of Scotland as a world-class golf tourism and events promotion. Golf tourism is worth in excess of £286m annually to Scotland’s economy, supporting more than 4,400 jobs.

The 2021 abrdn Scottish Open from 8-11 July at the Renaiisance Club in East Lothian features the strongest player field in the history of the event with five of the world’s top 10 players competing.