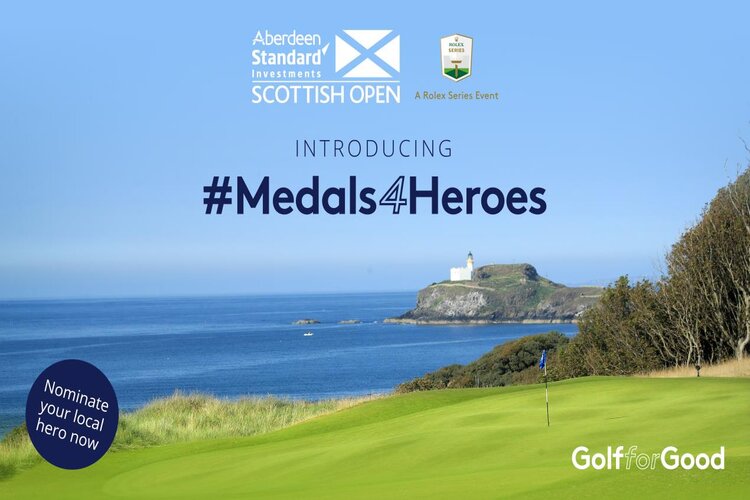 The European Tour has announced the launch of #Medals4Heroes, a mini-medal competition that will pair everyday heroes of the COVID-19 pandemic with professionals at this year’s Aberdeen Standard Investments Scottish Open, as part of the Tour’s Golf for Good initiative.

#Medals4Heroes nominations to celebrate key workers and everyday heroes from across Edinburgh and the Lothians are open now. To nominate a worthy candidate for an unforgettable golf experience on Tuesday September 29, 2020 at the Renaissance Club in East Lothian, please click here.

Applicants will be asked to submit up to 150 words describing the positive contribution their nominee has made to their community or the lives of others.

As part of the wider Golf for Good initiative at the Aberdeen Standard Investments Scottish Open, SAMH – Scotland’s national mental health charity – has been confirmed as the official tournament charity, while the Trussell Trust, which supports a nationwide network of foodbanks to provide emergency food and support to people locked in poverty, will be a charity partner.

Both winners will be subject to the stringent safety and testing protocols set out in the European Tour’s comprehensive health strategy, which is aligned with international Government guidance and public health guidelines. An alternative virtual prize will also be offered to any winner who cannot attend in person.

Further details of fundraising and other Golf for Good activities at the Aberdeen Standard Investments Scottish Open will be announced soon.

The Aberdeen Standard Investments Scottish Open, which takes place on October 1-4, 2020, will be the second Rolex Series event on the reshaped 2020 Race to Dubai, and the first since the resumption of the season. It takes place for the second consecutive year at The Renaissance Club which was founded in 2008 and nestles on 300 picturesque acres along the Firth of Forth.