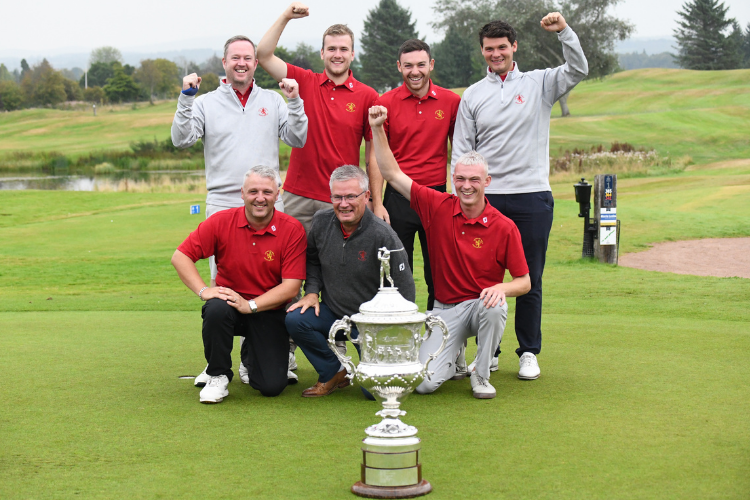 The Lothians won the Scottish Men’s Area Team Championship for the first time in fourteen years when they beat the Borders by 3 ½ – 1 ½ in this year’s final at the Kings Golf Club Inverness.

The Lothians begun the championship by claiming a seven-shot victory over the Borders in a 36-hole stroke play qualifier in which reigning Scottish Amateur Champion Angus Carrick (Lothians) and his fellow Scottish international Darren Howie (Borders) shared medallist honours on nine under par one shot ahead of Connor Wilson (Lothians).

All three will be hoping to maintain that sort of form when they represent Scotland in the R&A Men’s Home Internationals at Hankley Common in Surrey on 15-17 September.

The Lothians then went on to beat number four seeds Perth & Kinross 3-2 in the semi-finals while the Borders beat the North by the same scoreline to maintain their hopes of clinching the title for the first time since the championship was inaugurated back in 1977.

In the final the Lothians got off to an excellent start when Andrew Benson beat Jack McDonald by 5&3 and Scott McCandless defeated Simon Fairburn 5&4. Carrick tied his singles against Stephen Roger but the winning point came in stunning fashion when Lothians champion Allyn Dick holed a 40-foot birdie putt across the 18th green to secure him and partner Kenneth Glen a one hole victory in the foursomes against Allan Turnbull and Jamie Morris.

The Borders’ sole win came from Howie who beat Wilson 3&1 in the top singles.

“It was brilliant”, said team captain Neil Anderson. “I’m delighted for all the boys. They all played very well and not just today. It has been a really good performance right from the start.

“It was a real team performance. This afternoon we got off to a great start with the wins from Andrew and Scott and then Allyn produced that putt to win the match. He’s had a fantastic year and that was certainly a great way to cap it off.

“The fact that we’ve won it in the year the Lothians are celebrating their one hundredth anniversary makes it a wee bit more special too.”

“It was a great way to win,” agreed Carrick. “We’re delighted because it has been a while since the Lothians have won and it’s the first time in the new format.

“The team did very well,” he added. “It’s a good way for Connor and I to go into the Home Internationals. We both played some pretty good stuff so we will be confident heading down there.

“We’ve got a strong team and I think we can put on a good show.”

The win by the Lothians at the Kings Golf Club Inverness means the Scottish Men’s Area Team Championship has produced seven different winners in the last seven editions of the competition. That run started when Renfrewshire prevailed in 2014 and they were succeeded as champions by Ayrshire (2015), Lanarkshire (2016), the North East (2017, the North (2018) before Fife claimed the trophy the previous time the event was played at Leven Links and Scoonie in 2019. The 2020 competition was cancelled because of Covid-19.