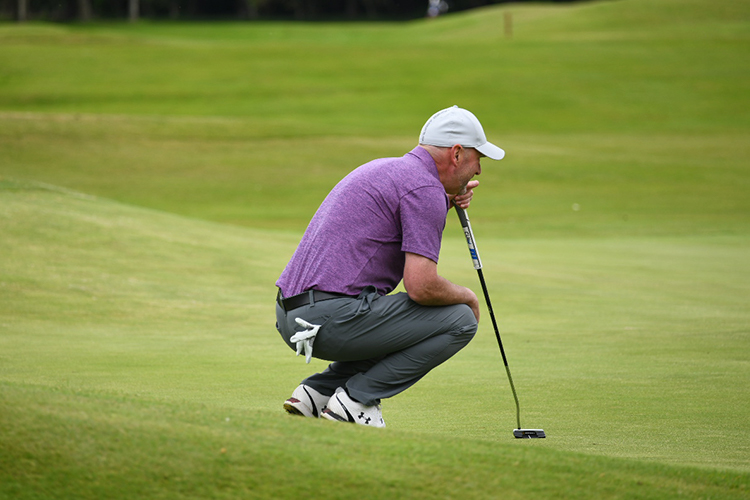 David Logie, from the Dun Whinny Golf Club at Gleneagles, carded a superb five under par 63 to claim the first round lead at the Scottish Senior Men’s Open Championship at Duff House Royal in Banff.

Derek Paton, a Scottish senior international from Dunnikier Park in Kirkcaldy, carded a one under par 68 to share eighth place with Ian Crowther, David Martin and Paul Moultrie but that bald statistic barely begins to describe his hectic day.

Logie got his round off to a great start with birdies at the second, third, fifth, seventh, ninth and 12th. He did drop shots at the 14th, 15th and 17th but birdies at the 16th and 18th confirmed his overnight lead.

“Surprised would be my initial feeling about it,” admitted the Scot. “I’ve been playing well but I didn’t quite see five under today.

“I hit the ball quite nicely in practice but rolled in a few putts today which makes all the difference.

“The conditions were pretty friendly out there, the pins were quite generous, but it is still way above what I expected. I’ll just have to go out and try to do the same again tomorrow.”

Kellock showed exactly why he has won the English Senior title for the last two years when he raced to the turn in five under par 29 only to drop shots on the 15th and 16th coming home. He admitted he was delighted with his opening round but did rue letting things slip a bit towards the end.

“It started very well,” he said. “I was five under par after six. I was hitting the ball solidly and I had a good pace on the putts but then I lost the pace from eight or nine onwards. I have opportunities on eight, nine, 12 and again on 18 so it was a bit disappointing to finish so weakly.

But I’m delighted to start with three under. I’d have bitten your hand off if you’d offered me that on the first tee.”

Seaton also made his score in the early part of his round with birdies on the second, eighth and tenth before keeping a bogey off his card with two scrambled pars over his last three holes.

It was certainly a lot calmer than it has been the last few days,” said Seaton. The course is in good condition so I was expecting low scores. I played very steady and for once putted quite well.

“I had 15 pars and three birdies. I got up and down from bunkers on 16 and 18 which was very pleasing and at the end of it all a 65 meant it was the first time I had shot my age. I need more of the same tomorrow.”

The best story of the first round probably belonged to Dunnikier Park’s Derek Paton who started the day in the draw for The Amateur Championship at Nairn but after losing in the first round to John Paterson then drove 56 miles to Banff to take up his place in the Senior Men’s Open field.

Paton’s cross-country dash appeared to have little effect on him when he fired four birdies in an opening nine of 30 although it was perhaps no real surprise when he dropped shots at 13, 15 and 16 to finish on one under par 67.

“It’s been tough,” admitted the Scottish senior international. “Making the cut at The Amateur took a lot out of me and then today I get up early to play against John. I played well, John just played a lot better, but at least I didn’t give him the game. He earned it with his play. He’s a fantastic lad and a great advert for Scottish golf.”

After the match was over Paton barely had a moment to gather his thoughts before hitting the road.

“I jumped into the car and drove down here which took about an hour and a half. I got here about 25 minutes before my tee time, so I hit a few putts, grabbed something to eat and got off to a flyer. After playing in The Amateur, it felt a bit like playing a practice round. It was so easy out there but then things caught up with me.

“I got a bit tired, got a bit lazy and made a few mental errors, but I held it together over the last couple of holes and one under is pretty good. I’m pretty happy with that.

“Now I’ve got to go back to Inverness to collect my stuff from the hotel,” he added. My wife’s still there. She caddied for me at Nairn. She packing stuff up but we’ll stay there tonight and then get up early and come back here tomorrow.”

Graham Bell came into the event bidding to claim the Scottish Senior trophy for a third time but has left himself with a lot to do after opening with a four over par 72 although he did make up some ground on the leaders with a birdie on the last.

The Scottish international from Downfield goes into the second round in the large group in a share of 37th place two shots ahead of 2018 champion Ronnie Clark, from Erskine, who found himself just below the cut line after a first round 74.

The cut comes after the second round with the top 60 players and those tied for 60th place progressing to the final 18 holes on Friday.