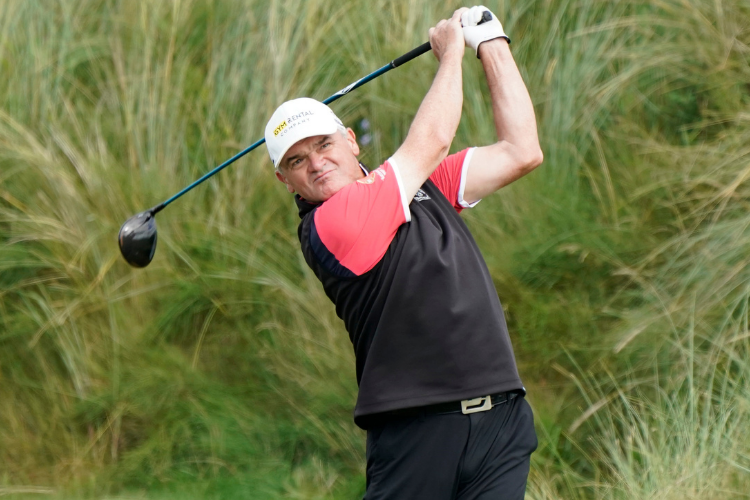 Paul Lawrie is encouraging the Scottish golfing public to savour live sporting action once again as he looks forward to hosting stars from sport and screen at Royal Aberdeen this week.

The former Open champion will fittingly host the Scottish Senior Open in his home city from Friday 10 to Sunday 12 September, with a star-studded Celebrity Series Pro-Am taking place on the eve of the tournament on Thursday 9 September. Lawrie, who is an Honorary Member of Royal Aberdeen, takes on hosting duties as well as returning to the event as defending champion, after winning his first Legends Tour title in the 2019 edition at Craigielaw.

With Covid-19 restrictions for major sporting events beginning to ease, ticket prices start at only £10 for the innovative Celebrity Series Pro-Am on Thursday, increasing to £15 for adults and £10 for concessions (over 50s) for each day of the tournament.

“I’m really looking forward to it,” said Lawrie. “It’s great to be able to welcome the Legends Tour to my home city and nice to play an event and stay in my own bed. I don’t get the chance to do that very often so that’ll be nice. It’s always good to play in front of a home crowd too, so hopefully we get some decent weather and people come out to see some of the legends of the game.

“I don’t think you can beat £10 in terms of value for money. It would be great to see lots of people out spectating and enjoying the quality of the golf these guys continue to produce. With live sport having been off the agenda for most of us for a long time, I think people will really be able to enjoy getting out into the fresh air, savour the beautiful course and scenery and being safe.”

Fans can also look out for some famous faces on the fairways for the Celebrity Series Pro-Am, with a host of leading names heading for the renowned links venue. Sir AP McCoy, the 20-time Champion jump jockey, tees up, alongside Scotland rugby men’s head coach Gregor Townsend and ex-players Gavin Hastings and Andy Nicol.

The opening nine holes are widely regarded as among the best in the world as the course weaves through the dunes by the sea, while the inward nine boasts spectacular views of the Aberdeenshire landscape.

Lawrie added: “Yeah, we’ve got some great guests involved. It’s been fun having the Celebrity Series running alongside the Alliance Pro-Am as it’s always fun to hear the stories from other sports people and ‘celebrities’. Royal Aberdeen is a top-class venue and in beautiful condition – I played it recently and it’s in excellent shape. It has some brilliant links golf holes, so I’m looking forward to competing. It’s a form of golf that I’ve always loved and I enjoy the variety of shots a course like Royal Aberdeen encourages you to play.”

Royal Aberdeen, which hosted the first three editions of the Scottish Senior Open from 1993-1995 and also The 2005 Senior Open, offers the chance for Lawrie to build on his 11th place in the overall Legends Tour rankings.

“It’s not been far away for me,” he said. “There’s been a lot of good stuff and a few things that have frustrated me but that’s golf!  Like I say, I’m looking forward to hosting this week and hopefully I’ll make a good defence of the title.

“I’m really enjoying seniors’ golf. It’s a lot more relaxed but there’s still a hugely competitive element to it. Of course, you still want to win when you step onto the tee. The competitive instinct kicks-in again. It’s just a little more friendly and relaxed compared to main tour golf.”

Scotland is the last qualifying event for the Celebrity Series with winners going to Mauritius in December to battle it out in the Grand Final for £100,000 for charity. For more information, visit: https://www.legendstour.com/

A 50% discount applies to Scottish golfers, and this will be automatically applied when you follow the link at the bottom of this story.