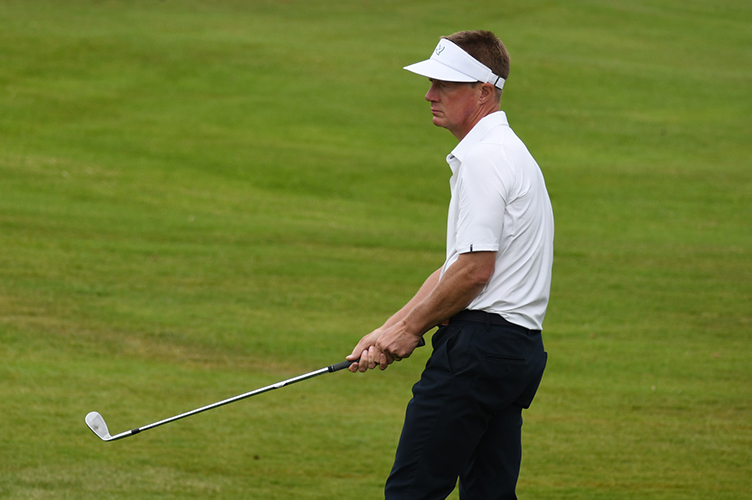 England’s Stephen Jensen carded a superb six under par 62 to vault into a share of the lead with Scotland’s Paul Moultrie heading into the final round of the Scottish Senior Men’s Open Championship at Duff House Royal.

Jensen finished fourth behind Rupert Kellock at the recent England Senior Men’s Stroke Play Championship at Blackmoor and the Army Club and now has a great chance of claiming an even better finish after a sparkling round in which he plundered seven birdies before dropping his only shot of the day on the 17th hole.

“I putted the lights out today,” Jensen admitted. “The greens were magnificent. I have been very fortunate to join two fantastic golf courses – The Wisley and Northants County -recently. Both have got superb greens and it stands you in great stead when you come to a place where the greens are rolling as nicely as this.

“I really got it going for a while and only started to get nervous on 17. Normally I start steering it long before then.

“It was great fun,” he added. “I really enjoyed it. My playing partner Alan (Mew) was immense as well. It was nice to be with the England (Senior Men’s) captain and hopefully, I’ve given him something to think about (when it comes to team selection) in a few months’ time.”

Moultrie (Royal Troon) shares first place on two under par 134 after firing his second successive 67. He was two over par for the round after a bogey on the tenth but then got back into red numbers with birdies at the 11th and his two closing holes to finish with a 67.

“I played reasonably steadily today apart from a double bogey on the eighth and I’m happy to have played the last eight holes in three under par,” said Moultrie.

I’m very much looking forward to the final round tomorrow,” he added. “I’m just going to try to go through my process and play good golf. If I can do that, I’ll be happy.

“To win the title would be great but there’s still a lot of golf to be played. As we all know, you can’t control what happens in golf, you can only do your best.”

The Scot and his English rival go into the final round a single shot ahead of Scotland’s Stewart Henderson (Hamilton) and England’s Tim Seaton (Grimsby). Henderson shot five birdies in a 65 while Seaton battled back from a double bogey on the 15th and a bogey on the 16th to birdie the 17th and post a two over par 70.

English Senior Men’s champion Stephen Kellock (Sunningdale) went into the second round in a share of second place alongside Seaton after both carded opening rounds of 65 but a three over par 71 saw him drop back into a tie for fifth place alongside compatriot Tim Price and Scotland’s Nick Robson (Royal Aberdeen) on level par 136.

First round leader David Logie (Dun Whinny) also slipped down the leaderboard.  He opened with a five under par 63 but needed 11 shots more to complete a second round 74 and that was enough to see him fall into a share of eighth place one shot further adrift.

Logie was joined on one over par 137 by fellow Scot Maurice Lindsay (Grange) and by Englishmen Trevor Foster (Pleasington) and Stuart Brown (Castle Eden). Foster is a past British senior champion having won The Senior Amateur Championship at Royal Porthcawl back in 2018.

The cut fell at 12 over par with a total of 69 players progressing to the final round tomorrow.

Defending champion Graham Bell (Downfield) was forced to withdraw with a back injury. Bell had been seeking to claim the title for a third time having won at the Royal Burgess Golfing Society in 2017 and then again at Luffness New two years later. The 2020 championship was cancelled because of the Covid crisis.