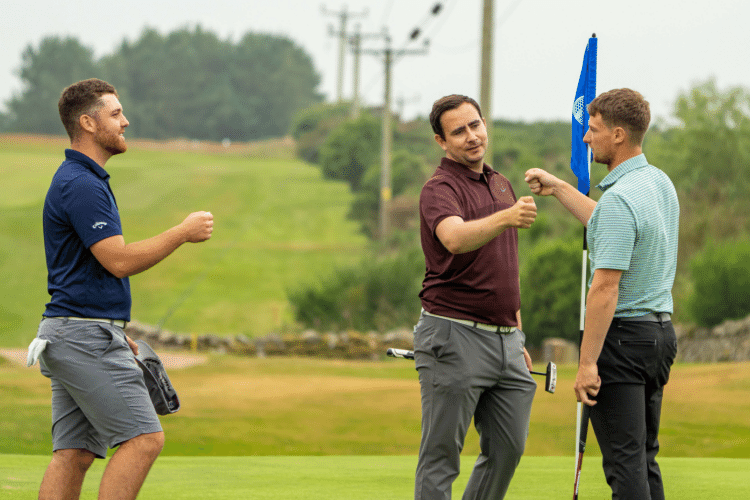 Josh Greer shot the low round of the day to vault into a share of first place on the leaderboard after the second qualifying round at the Scottish Men’s Amateur Championship at Murcar Links and Portlethen.

The Australian-based Scot carded an eight under par 64 at Portlethen to finish the 36-hole qualifier tied with Duff House Royal’s Callum Bruce and Portlethen’s Ben Murray on nine under par 134.

Bruce shot a 65 at Portlethen while Murray travelled to Murcar Links where he carded a two under par 69.

On another day of low scoring which started with a lengthy weather delay caused by thunder and lightning in the Aberdeen area, the experienced Scott Crichton from Leven Links carded a level par 71 at Murcar Links in the company of Murray to claim a share of fourth place alongside Blairgowrie’s Cormac Sharpe on seven under par 136. Sharpe was also at Murcar Links where he returned a one under par 70.

Eric McIntosh from Bruntsfield Links might also be another player to keep an eye on when the match play stages get underway. He won the 2016 Scottish Boys’ Championship at Murcar Links and he carded a 67 at Portlethen to climb into a share of sixth place with first round leader Steven Stewart (Clydebank & District), Craig Leith (Royal Aberdeen), Calum Scott (Nairn) and Stuart Easton (Irvine) on six under par 137.

Stewart added a three over par 74 at Murcar to his nine under par 63 at Portlethen the previous day.

There was also a distinguished group on five under par 138 with Scottish internationals Rory Franssen (Auchterarder) and Darren Howie (Peebles) both shooting sub-70 rounds at Portlethen to share 11th place with Matthew Wilson (Forres) and Scott McPherson (Bothwell Castle).

Greer plays out of the Joondalup Golf Club in Western Australia but has been a regular visitor to Scotland over the years and on his last visit to his homeland two years ago reached the last 16 of the Scottish Amateur at Crail.

He will now be looking to go even deeper into the draw after two excellent days in Aberdeenshire.

“I played very well today,” said Greer, who started his golfing career at Gourock Golf Club and made his debut for Scotland at the 2017 Boys’ Home Internationals at St Anne’s Old Links.

“My driving was good and so were my irons. I missed a few chances on the greens but overall my putter worked as well. The weather delay didn’t bother me. I just slept a bit longer than I would have done if we hadn’t had the bad weather.”

“I’m looking forward to the match play,” he added. “Murcar is a tougher course but I’m driving the ball well and that’s the key round there. You’ve got to keep in on the fairway.”

San Diego State University graduate Bruce had been tied for 26th place after steady opening 69 at Murcar Links, but moved up into a share of first place after shooting eight birdies at Portlethen. His one dropped shot at the 11th was his only blemish over his 36 holes.

“I’m delighted,” he said. “I’ve kept the mistakes to a minimum and managed to hit the fairways which you have to do at Murcar. I played the course in the Scottish Boys’ in 2016 so have a bit of match play experience there.

“It’s been a good week so far and I’m staying at home which is a bonus. There’s nothing quite like home cooking and sleeping in your own bed.”

Murray shot a seven under par 65 over his home course at Portlethen and he followed that up with a solid round at Murcar Links in which he birdied the 1st, 8th, 14th and 18th, but dropped two shots to par on the par three 5th.

“The conditions when we played were pretty much perfect again,” he said. “I was lucky. I was running a bit late this morning so the delay might even have helped me a bit. I didn’t think it was going to be like this. It was the icing on the cake to play and not get wet.

“The plan today was to keep the ball in play. I made one mistake when I made a double on the par three but I didn’t let that bother me. That’s unusual for me. Sometimes I lose my head when something like that happens but not today. The weather was nice and I was swinging good so I just tried to grind it out.

“I think I’m going to play a little bit more aggressive on certain holes in the match play but other than that the main plan is just to keep it in play and try to keep the pressure on my opponent,” he added.
“We’ll see how it goes.”

Defending champion George Burns is safely through to the match play stage after adding a two over par 73 at Murcar Links to the five under par 67 he scored at Portlethen the day before. His three under par aggregate was enough to see him claim a share of 23rd place.

The cut came at one over par with 64 players progressing to the knock-out competition. One of those who missed out was 2016 champion George Duncan from Windyhill who carded a triple bogey and a double bogey in a 76 at Murcar Links to miss out by two shots.

The draw for the first round of the match play can be found here.