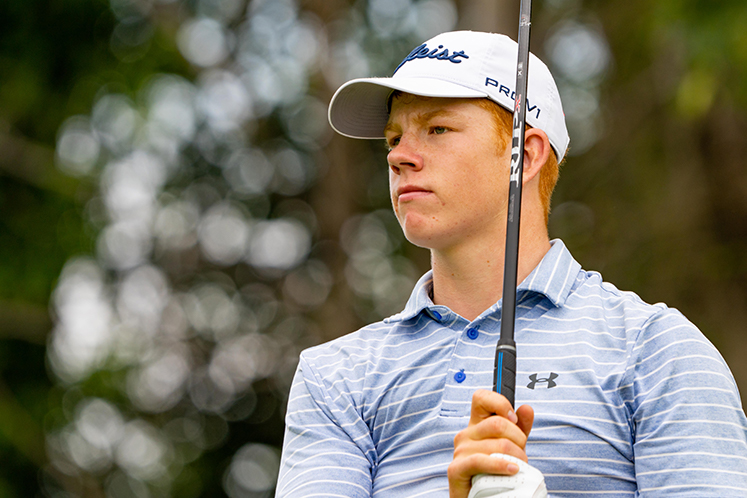 Gregor Graham carded a superb eight under par 63 to tie the course record in the first round of the Scottish Boys’ Amateur Championship at Bruntsfield Links in Edinburgh.

Graham carded nine birdies over his last 15 holes to go into the second qualifying round two shots ahead of Blairgowrie club-mate Cormac Sharpe who fired eight birdies of his own in a six under par 65.

On a day of low scoring, Aboyne’s Daniel Aitkin celebrated his 18th birthday by firing a five under par 66 to claim third place one shot ahead of Bothwell Castle’s Callum Waugh and Ross Laird from Glenbervie and two in front of Alex North from the St Andrew Golf Club.

On a great day for the Graham household, Gregor’s younger brother Connor returned a two under par 69 to share seventh place with Pyecombe’s Alfie Robinson and Ciaran Patterson from the nearby Royal Burgess Golfing Society while Jamie Mann from Close House, Max Shirvell from Brocket Hall, Cameron Johnstone from Kilmarnock (Barassie) and Nairn’s Calum Scott all shot 70 to end the day in a share of tenth place.

First round leader Graham missed birdie chances on his first three holes before starting his birdie barrage with a four on the 543-yard par five 4th. He fired five more at the 6th, 8th, 9th 12th and 13th before dropping his only shot of the day but then bounced back with four successive threes to finish his round in style.

“It’s a great start,” said a delighted Graham. “I’ve played the course a couple of times now and I really enjoy it.

“I gave myself three really good chances over the first three holes. Nothing dropped from ten to 20 feet but then it started happening. I made my first birdie on the fourth hole and then three more on the last four holes of my front nine.

The back nine I played really good again. I started slow but then the par fives came and I made a nice couple of birdies and was three under for my last four. It was really good.

“This is my first boys’ event of the year,” he added. “I’ve played a lot of men’s competitions and I’ve been playing some really good stuff without getting the results I wanted. I’ve been playing well but have had one bad hole or one bad shot here or there. It was nice that it finally clicked altogether and it’s a great course to do it on.”

Sharpe made a fast start on a Bruntsfield course that has recently been extensively remodelled by renowned course architect Tom Mackenzie of Ebert & Mackenzie.

He was five under par after seven holes but dropped shots at the 10th and 12 before getting back on track with further birdies at the 13th, 15th and 18th.

“I played well pretty much the whole round,” he said. “I got off to a flier which was good and also finished well after dropping a couple of shots just after the turn.

He was also delighted to see how well club-mate Graham had played.
“It’s great to see Gregor playing so well. It pushes you on because you know how well he can play. You know you have to shoot a good score to beat him and that will be the same throughout the week.

“I’m looking forward to tomorrow and hopefully getting into the match play.”

Aitken was among the early starters at 7.40 am and had to survive an early scare to post a bogey-free round which included no less than three twos on par-threes.

“The round got off to a bit of a shaky start. I hit one right off the first tee and had to scramble for a par but as soon as I calmed down and got into a bit of a rhythm the birdies started to drop.

“It was too early this morning to think much about my birthday but it’s certainly a nice present to go round in 66 and find myself well up on the leaderboard. That’s something to celebrate tonight.”

A total of 64 players will qualify for the match play after tomorrow’s second round of stroke play. The cut currently lies a six over par.