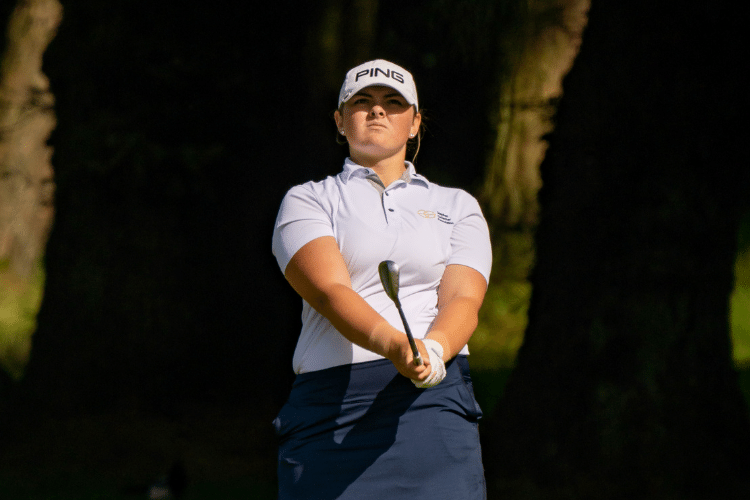 Katie Graham from Hamilton booked her place in the last four after beating top seed Robyn Fowlie in the quarter-finals of the Scottish Girls’ Amateur Championship at Strathaven.

Graham secured a convincing 4 & 3 victory over Royal Troon’s Freya Russell in the morning but then had to come from behind to claim a last gasp victory over Forfar’s Fowlie on the 19th hole.

Fowlie went ahead as early as the first and was two up through 16 before Graham drew level for the first time since the first by winning the 17th and 18th with pars. She went on to secure a hard-fought victory with another par on the first extra hole.

“It certainly wasn’t easy,” she admitted. “I was down all the way but I was always confident I could get back in it.

“I think my mental game helped me today. I just kept battling away trying to get back at her.

“I’m glad I came out on top although I feel a bit sorry for Robyn because for a lot of the time she was playing the better golf.”

Graham’s opponent in the last four is Isla McDonald-O’Brien from Shrewsbury who also had to go to the 19th hole in the morning before beating Hazlehead’s Rachel Mathieson and then defeated Ruby Watt from the Paul Lawrie Golf Centre 4 & 2 in the last eight.

In the other semi-final Aboyne’s Carmen Griffiths will face Alice Webb who plays out of Parkstone in Dorset.

Griffiths had a straightforward 8 & 7 victory over Strathmore’s Kirsten Miller in the first round but then had a much tougher test against Rachel Foster from Prestwick St Nicholas after lunch.

Foster reached the quarter finals of the recent Scottish Women’s Amateur Championship at Gullane where she lost to eventual champion Chloe Goadby and against Griffiths she led all the way until her opponent drew level on the 15th and then went ahead for the first time in the match on the 18th hole.