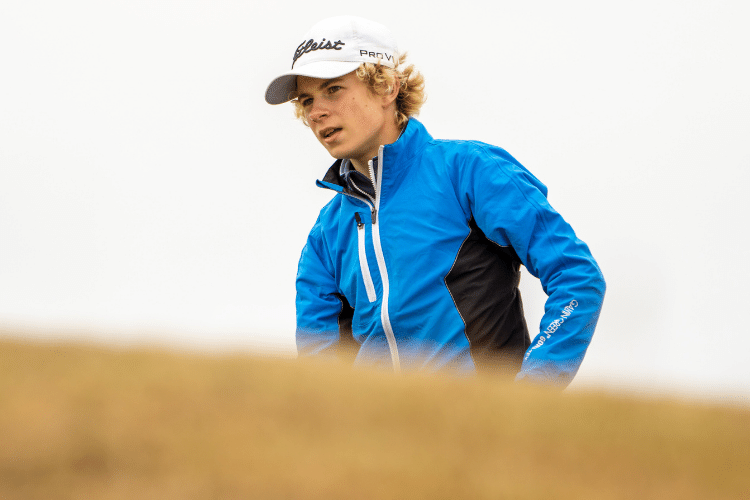 14-year-old Connor Graham’s stellar run at the Scottish Amateur Championship continued when he beat the vastly more experienced Lewis Irvine in the quarter-finals of this year’s Championship at Murcar Links.

Irvine reached the final of the 2019 championship at Crail but this time his challenge for the title ended a couple of rounds earlier despite winning the first hole against his precocious opponent from Blairgowrie.

Graham is currently leading the 2021 Scottish Boys’ Order of Merit but what he has already achieved at Murcar takes his game to an altogether different level. He beat number one seed Ben Murray from Porthlethen by 3 & 2 in the third round and then withstood everything Irvine could throw at him before winning on the 20th hole.

It is believed he is the youngest player ever to reach the last four of the Scottish Amateur Championship.

“It’s amazing to get into the semis because we had no idea how far we were going to get at the start of the week,” he said. “It was good just making the cut but getting to the semis makes it extra special.

“Lewis was a tough opponent and I had to play really good golf to come out on top.”

Graham’s club-mate Cormac Shape 4 & 3 in the morning and then won by the same score against Auchterarder’s Rory Franssen.

That means 27-year-old Carrick is one step closer to emulating his father David who won the Scottish Amateur at Southerness back in 1985.

Carrick raced into an early led by winning the first, fourth, fifth and eighth before Franssen pulled one hole back on the 11th. Carrick went four up again with a win on the 13th but Franssen won the 14th before Carrick sealed victory with a win one hole later.

“I played solid and hardly missed a shot,” said the victor. “I had a handful of birdies and just one bogey which is always going to be tough to beat round here.

“It’s a tremendous achievement to get through to the semi-finals. It feels great. I reached the quarter finals at Muirfield (in 2015) so it’s nice to go one round further here.

I really looking forward to tomorrow regardless of what happens,” he added. “I’m just going to go out and enjoy it and see what comes.”

In the other half of the draw, Murrayfield’s Andrew Ni ended 2019 champion George Burns’ hope of becoming the first man to successfully defend the title for 38 years when he beat Burns by one hole.

Burns had come from behind in his morning round against Darren Howie but this time there was to be no reprieve after going two down when he lost the fourth and the fifth. He did win the 14th and 15th to briefly get back to all square but went one down again on the 17th and his last chance disappeared when he narrowly failed to hole out for a birdie from sand one hole later.

“George is an incredible golfer and made it very tough for me towards the end,” said 23-year-old Ni. “I just had to stay calm. My Dad was on the bag to keep me calm and to make sure I played my own game and not against him.

“I knew he would go close out of the bunker at the last because he did the same at the fourth. He did almost hole it but thankfully for me he didn’t and I was able to two-putt and get out of there.”

Ni’s next opponent will be Castle Park’s Connor Wilson who beat Scottish Boys’ Home Internationals team member Ross Laird 3 & 1 in the morning and then defeated Crail’s Andrew Davidson 3 & 2 in a topsy turvy match in which none of the first eight holes was halved.

“It’s a great achievement to make it to the last four. I’m delighted,” said Wilson.

“This morning it was tough against Ross Laird. He was a great opponent. He hits it great and made it very difficult for me. Andrew’s a steady player and doesn’t make many mistakes so I’m pleased to have beaten him and get to the last day.

“I’ve known Andrew (Ni) for a long time so I know my game against him tomorrow will be very tough as well.”

The draw for the final day of the 2021 Scottish Men’s Amateur can be found here.