Graham Goes Low to Head the Qualifiers at the Scottish Boys 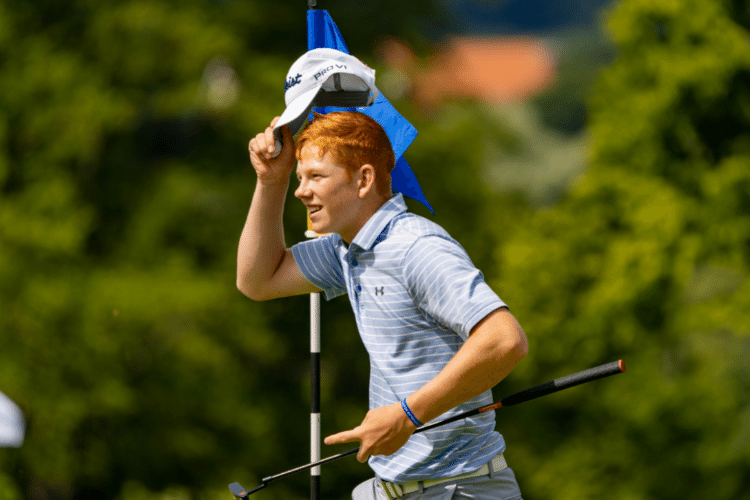 Blairgowrie’s Gregor Graham produced another birdie blitz to spreadeagle the field after the second round of qualifying at the Scottish Boys’ Amateur Championship at Bruntsfield Links in Edinburgh.

Graham added a six under par 65 to his opening 63 to claim a seven-shot victory over Glenbervie’s Ross Laird on 14-under par 128 and now goes into the first round of match play as number one seed and full of confidence that he can win his national boys’ title for the first time.

The Blairgowrie teenager got his day off to a bad start when bogeyed the first after finding a divot off the tee but he quickly repaired the damage with birdies on the second and the third and was to add six more in what would have been an impressive performance at any level of the game.

It was no real surprise that he was delighted with his two days’ work during which he made 17 birdies over the 36 holes and dropped just three shots to par.

“The day started badly when I hit my first tee shot quite nice down the right but then walked up and found it in a divot. I said ‘here we go, maybe I had all my luck yesterday’.

“From there, I put it into the bunker, knocked it out to five feet and missed the putt for par but then I made two nice birdies on two and three and played really steady after that,” he said.

“I’m going into the match play with a lot of confidence in my game. I’m looking forward to the match play. I’ve done quite good in the stroke play at previous Scottish Boys but now I’d like to go all the way.

“I’m just going to take it one game at a time, one shot at a time and see where it goes,” he added.

Laird was Graham’s nearest challenger after adding a 68 to his opening 67 to finish three shots clear of Graham’s Blairgowrie club-mate Cormac Sharpe on seven under par 135.

Alfie Robinson from Pyecombe carded a one under par 70 to finish alone in third place on three under par 139 while Nairn’s Calum Scott and Cameron Johnstone from Kilmarnock (Barassie) also returned the same score to claim a share of fifth place with Murrayfield’s Adam Hawthorn and Loretto School’s Archie Wyatt. Hawthorn tied the second lowest round of the day with a 68 and Wyatt posted a 69.

There is also a place in the match play draw for Graham’s younger brother Connor. He returned a second round 74 to end up in a tie for 15th place with Bothwell Castle’s Callum Waugh and US-based Niall Shiels Donegan who was the leading Scot at last week’s Scottish Boys’ Under-16 Open at Dumfries & County.

The draw for the first round of the match play can be found here.