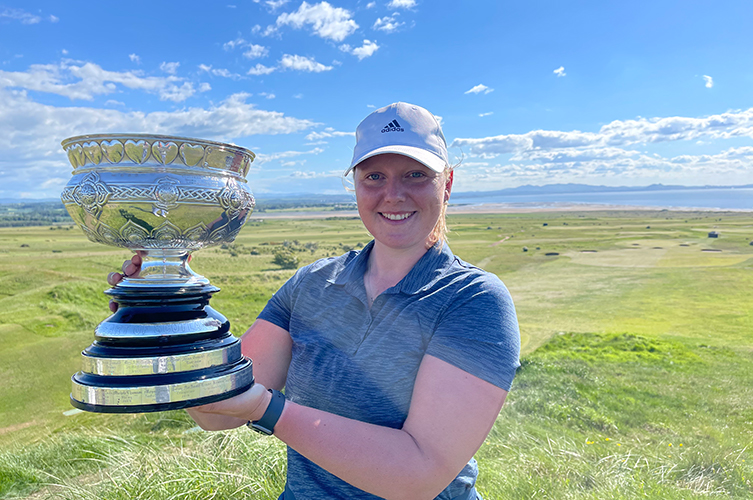 Goadby had played a couple of practice rounds at Gullane with Honorary member Matthew in the lead up to the championship and she admitted the advice she received helped her to beat great friend and rival and claim her women’s national match play title for the first time.

Goadby began the championship by finishing 14th behind Louise Duncan (West Kilbride) in the 36-hole stroke play and was taken to the fifth extra hole in her first round match against Penelope Brown (Auchterarder) before starting to find the sort of form that saw her earn a place in GB & I’s provisional Curtis Cup squad late last year.

She claimed a one hole victory over Rachel Foster (Prestwick St Nicholas) in the second round and then beat St Rule Trophy winner Hannah Darling (Broomieknowe) 5 & 4 in the semi-final before maintaining her momentum with a fast start Mactaggart in the final.

Goadby began the final by winning the second and third holes. The reigning Lothians champion from Minto briefly got back to all square with wins on the fourth and the eighth but Goadby raced into a three hole lead by winning the ninth, 10th and 11th before sealing her success with another win on the 466-yard par five 15th hole.

“It’s fair to say I have exceeded my expectations this week,” said the new champion. “It feels amazing and to do it here at Gullane makes it even better. I’ve always loved the place. It reminds me of home at St Andrews.

“The last person to win this here was Catriona (Matthew) who is now part of the new Scottish Golf Performance programme that I’m part of so that makes it even more special.

“She has been a great mentor to us so far and I came down for a couple of games with her the other week and she helped me with a few lines and a bit of advice. That was massively helpful.

“She also dropped me a message earlier today just to tell me to stick to my processes and to stay patient which I was reminding myself of out there. It’s easy to get a bit down when you miss a couple of putts but I kept Catriona’s words in my head and that helped a lot. She’s been massively helpful to me.

“Tara and I are great friends,” she added. “It’s a tough one. It’s not easy to come up against someone you’re close to, but you’ve just got to put that to one side and pretend it’s not them you are playing. You’ve just got to stick to your own game and I think I did that well today.”

The new Scottish champion now heads to Kilmarnock (Barassie) for this week’s Women’s Amateur Championship with high hopes of securing a second successive title in the space of seven days.

“I think I need to take a quick breather after this and then head to Barassie,” she said. “It starts tomorrow so it’s a quick turnaround but I think I will be ready.

“Hopefully, I’ll get through to the match play and then we can see what I can do from there. It’s great to have got some match play practice this week. Anything can happen, I suppose.”

Mactaggart reached the final with a 5 & 4 victory over 2015 champion Clara Young from North Berwick. She won the first two holes and was four up at the turn after further wins on the seventh and eighth before moving five ahead with another win on the 11th.

The final of the second flight Clark Rosebowl competition turned about to be an all Blairgowrie Golf Club affair with both Katy Alexander and Megan Ashley winning their semi-final matches against Megan Docherty (Bishopbriggs) and Isla McDonald-O’Brien (Shrewsbury) respectively.

In the final Ashley was one up at the turn before Alexander pulled away to win 3&2.