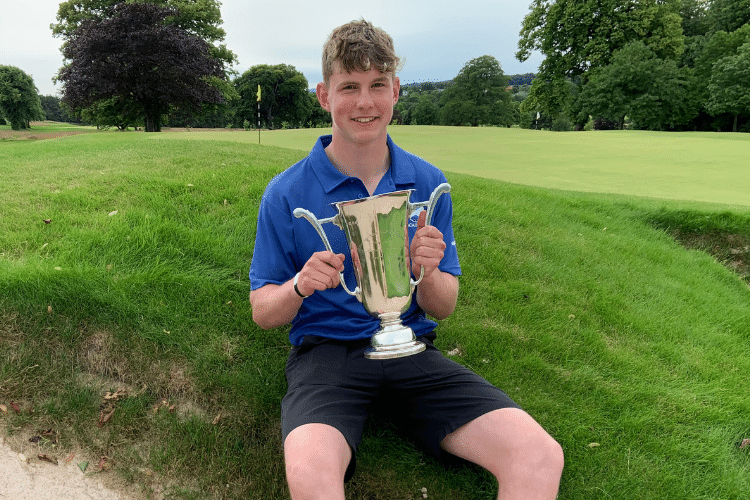 Finnie, from the Royal Burgess Golfing Society, was four up after winning the 11th hole of the final but then watched as Scottish national performance squad member Laird won the 14th, 16th and 17th to mount the 18th tee just one hole behind his rival.

That would have been enough to disturb many players but in the end, Finnie, watched by a large crowd from his home club, held his nerve by chipping to five feet in three before Glenbervie member Laird conceded when he missed his own putt for a par.

“It feels amazing,” said the new champion. “I came into this week with not many expectations. I knew I’d been practising a lot and getting better so it’s great to see the rewards.

“I had a great game with Ross this afternoon. I was up most of the way. He brought it back with back-to-back birdies on 16 and 17 but I was able to see it through. I’m delighted, absolutely delighted.

“I was a nervous standing on the 18th hole but I knew I had been swinging it well all week.

“I was a bit disappointed when my second shot didn’t run quite as far as I thought it would, but the chip was good and I fancied myself to two-putt from five feet if I’d had to.”

“I’ve had a good week,” said the gracious Laird, whose next competitive appearance will be at the Scottish Amateur Championship at Murcar Links and Portlethen at the end of this month.

“I didn’t play my best this afternoon, but I put up a hard fight taking him to the 18th and narrowly losing out in the end.

“The course is in fantastic condition,” he added. “The greens are amazing. Probably the best I’ve played on this year.”

Finnie reached his first national final following a nerve-wracking semi-final against Nairn’s Calum Scott. He was behind all the way against his more experienced rival until he won the 18th hole to draw level and then capped that by winning on the first extra hole.

The other semi-final was almost as close with Laird beating Loretto School’s Archie Wyatt on the 18th hole. Wyatt was one up at the turn but lost the 10th and the next seven holes were then halved before Laird won the 18th to secure a one hole victory.