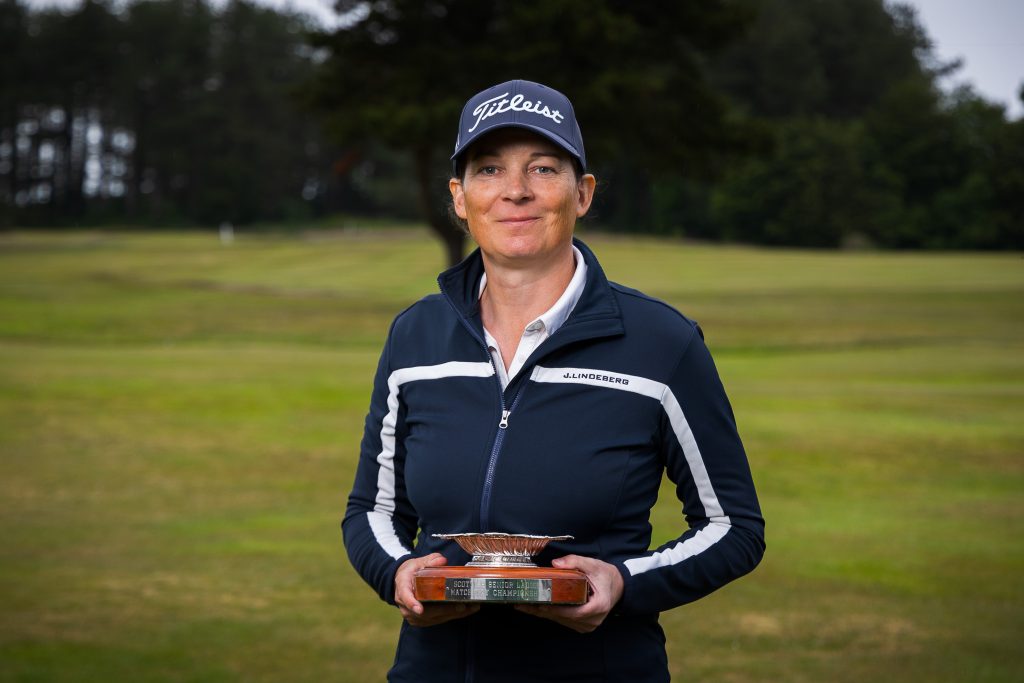 Ferguson-Snedden becomes the second woman in a row to win back-to-back titles, with Elaine Moffat winning in 2018 and 2019.

In the semi-finals this morning, Ferguson-Snedden beat Alison Davidson 4&3, while Wooster overcame Sheena Wood 4&2. Earlier in the tournament, Ferguson-Snedden had also beaten two-time winner Moffat in the last-16.

The final was a very tight affair, with the lead changing hands multiple times over the course of the round. Of the eighteen regulation holes played, only four holes were halved.

Wooster started the final strongly, winning the opening hole, but Ferguson-Snedden quickly bounced back with wins at the second and fourth to get her nose in front.

By the time the players reached the ninth, the match was again all square but a win from Wooster saw her take an advantage into the inward half. The tone of the match continued though, and Ferguson-Snedden regained her advantage with wins on ten and eleven, before Wooster drew level on twelve.  With six holes to go, the entertaining final was perfectly poised.

After a half on thirteen, Ferguson-Snedden took control of the match, winning both fourteen and fifteen to take a two-up lead with just three holes to play.

However, Wooster was not going to give up in the thrilling back and forth, winning the sixteenth to halve the deficit to one.

Heading down the last one down, Wooster would take the match to extra holes in incredible fashion, holing her second shot from the middle of the eighteenth fairway for eagle!

Despite Wooster’s heroics on the last, Ferguson-Snedden regrouped for the extra holes, putting her second shot on the nineteenth to five foot and holing the putt for birdie to claim the title after a thrilling final.

Speaking to Scottish Golf, a delighted Ferguson-Snedden said, ‘It feels great, it’s a bit unbelievable to repeat last year. I was completely flabbergasted last year and then this year the standard of competition was so high so to come out on top is just amazing.

‘The conditions today were interesting! It was horrible when we started then it gradually improved but by the end it was back to where we started but I suppose that’s golf in Scotland!

‘I played really well, probably about as good as I could. There were a lot of good shots, but the key moment was staying calm when Sue made two on eighteen to extend the match.  I made birdie on the first extra hole, and I’m chuffed with that.

‘I was probably less nervous this year because I didn’t feel I had anything to prove. Once I got to the final, I thought win or lose it has been a great defence so I was a bit more relaxed about it.

‘Stranraer has been excellent; it was in really good condition and it’s a great matchplay course. I played here eight years ago and the view from the fifth tee has been the wallpaper on my phone ever since!’

In the nett matchplay, it was last year’s beaten finalist in the scratch matchplay, Iona McKean, who came out on top against Wigtownshire’s Gwen Robson by a score of 5&4.  With the match all square after five holes, McKean took control of the match with wins on six, seven and nine, before stretching her lead to five up after thirteen and halving the fourteenth to seal the win.

A full list of scores from the Scottish Senior Women’s Open can be found here.