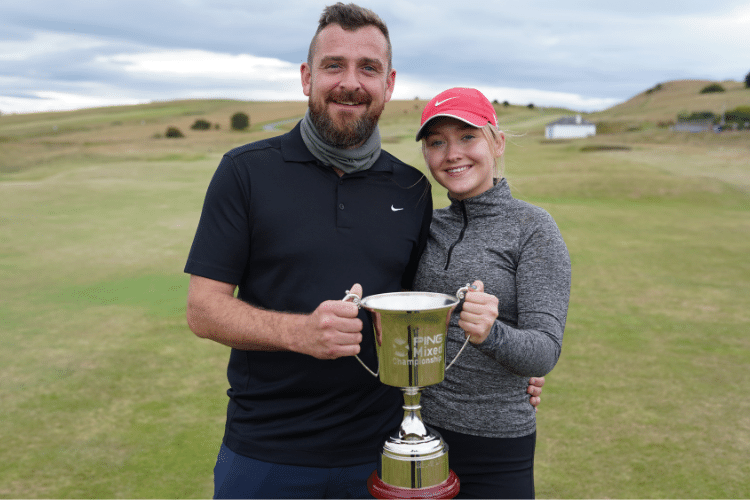 Raymond and Elise McQueen have been crowned as the new PING Scottish Mixed champions on a day of remarkable scoring in this year’s championship at Gullane No. 1.

The father and daughter duo from Dullatur Golf Club in Cumbernauld carded a massive 49 points in the 18–hole mixed foursomes stableford final, but incredibly only beat Mark Skilling and Emma Stirling of Troon Welbeck after a card countback.

The Dullatur pair opened their round with three points at their first hole (6th) and then moved swiftly into gear with four points at the 8th. They followed that with 3 points at the next 2 holes to climb the leaderboard.

That was mightily impressive, but even more fireworks were to follow on the back nine where their highlight was a gross two on the par-3 13th which netted them five points. Two more four-pointers at the 12th and the 17th coupled with three-pointers on the 10th, 15th and 18th, two-pointers at the 11th and 16th and solitary one-pointer on the 14th helped them to come home in 27 points and wrest the title from their unfortunate Troon Welbeck rivals by a single point over the last nine holes.

On the pairs’ final hole (5th) they managed a net eagle, scoring them 4 points and drawing level with the duo from Troon Welbeck.

A total of six pairs accumulated 40 or more points over what is one of the finest and most challenging links on the East Coast of Scotland.

Fraser Munro, Head of Events at Scottish Golf said, “The excitement of Friday’s Grand Final was a fitting finale to the year. It’s been fantastic to see people back out playing our events this year, enjoying golf and hospitality at some outstanding venues, meeting new people and playing with smiles on their faces.

“A huge thank you to all of our partners, host venues, volunteers and competitors who make our events possible each year – we look forward to welcoming you and many others to our events next year.”

The final PING Mixed Championship leaderboard can be viewed on the Scottish Golf App.