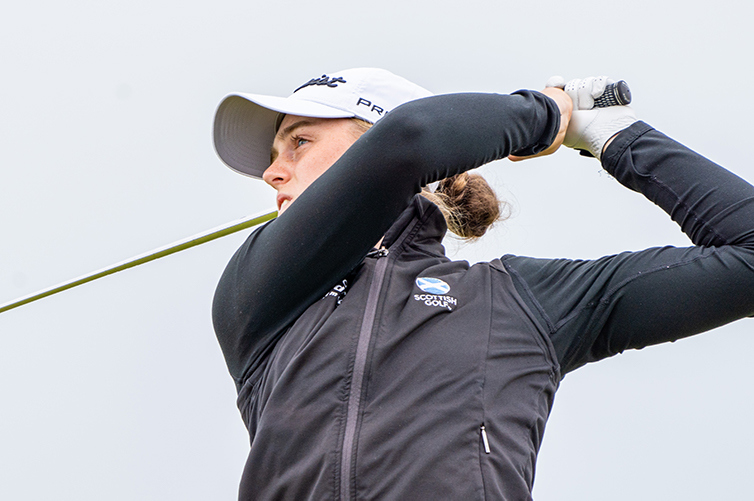 Scotland’s Hannah Darling holds a slender one shot lead over compatriot Chloe Goadby heading into the final round of the 2021 Helen Holm Scottish Women’s Open at Royal Troon Portland Course.

17-year-old Darling carded a second successive five under par 67 to finish the day on ten under par 134 but a couple of hours later was nearly caught by new Scottish Women’s Amateur champion Goadby who birdied the last for the second day in a row to post her own 67 and go into the final round on 135.

Darling started the day with a dropped shot at the 458-yard par four first hole but then birdied the second, sixth and ninth to go out in 33 before carding four birdies and a bogey coming home to give herself a great chance of becoming the first Scot to lift the trophy since Heather Stirling all the way back in 2002.

“It was good out there,” said the in-form Darling, a two-time Scottish Girls’ champion who won the Recent St Rule Trophy at St Andrews and then reached the semi-finals at both the Scottish Women’s Amateur and the Women’s Amateur Championship.

“It was a bit windier than yesterday and a bit colder as well but still pretty good. I played solid and didn’t make that many mistakes.

“There were a few shots out there I wasn’t all that comfortable with so I have just phoned my coach Ian (Muir) to get it sorted out for tomorrow but it’s nothing major so I’m looking forward to the final round.

I just need to do what I’ve done so far,” she added. “I feel pretty comfortable with my game. I was hitting it good. I just need to stay patient and treat it like any other round.”

Goadby will also be confident she can end Scotland’s long winless drought after beating Darling on the way to claiming her first Scottish Women’s title at the start of this month at Gullane.

The former Stirling University student stormed home with five birdies in her last seven holes to add a 67 to her opening 68 and believes she is in great shape to claim a rare Scottish double.

“Today was pretty steady to start off with,” she said. “I missed a couple of chances on the front nine but I tried to keep hitting good shots and give myself more chances coming home.

“The finish helps to keep me right there heading into tomorrow.

“I’ve played great for the first two rounds and I need more of the same tomorrow,” she added. “I’ve just got to stick to my game plan and, if the putts drop, I’ll be there or thereabouts tomorrow.”

The two Scots will go out in the last group for the final round but they certainly will not have it all their own way with 2019 Women’s Amateur champion Emily Toy and 2020 Australian Women Amateur champion Charlotte Heath breathing down their necks on eight under par 136.

English elite squad member Heath made a major move with a six under par 66 while her compatriot Toy carded a second successive 68 to share third place just behind the leading Scottish pair.

Both will be hoping to emulate former English women’s elite squad colleague Lily May Humphreys who was the last English winner in 2018.

“It has been good,” said Toy. “I felt my game tee to green wasn’t as good as yesterday, but my short game was better, so if I can combine the two tomorrow I’ll be very happy.

“It was certainly a bit tougher than yesterday but I’m happy with how I’m striking it, so that’s good.

“I just need to carry on doing what I’ve been doing and what will be, will be. There is a low score out there but there’s also a lot of trouble as well. I’ve just got to play my own game and see what happens.”

“Today was all about being patient,” said Heath. “I feel the front nine is harder than the back nine so I’m happy to accept pars are good on that stretch and then hope I can take the opportunities coming home.

“It’s a great course and I’ve really enjoyed it so far. Tomorrow I’m just going to play and have a bit of fun.”

The conditions were not as conducive for low scoring as they were during the opening round but that did not stop former Scottish Women’s champion, Clara Young, also posting a 66 to finish alone in fifth place on seven under par 137.

Australia’s Kirsten Rudgeley could also pose a real threat to the leaders in the final round after shooting a 68 that leaves her tied for sixth place alongside new British champion Louise Duncan and local Royal Troon member Hazel MacGarvie.

MacGarvie will not be short of local support after carding a 68 while Duncan eagled the last on her way to posting a two under par 70.

The cut fell at eleven over par 155 with 60 players progressing to the final round tomorrow.