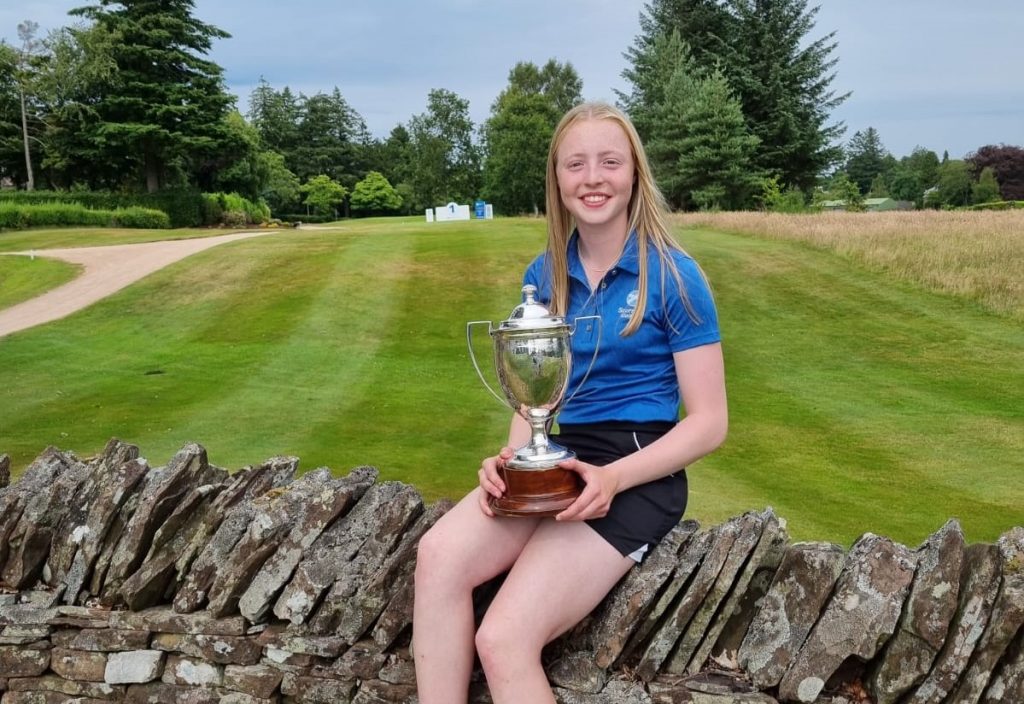 Scotland’s 2022 Boys’ and Girls’ Amateur champions were crowned on Sunday after a thrilling week of golf at Edzell and Auchterarder.

After eight rounds of golf in five days, Laird overcame Gullane’s Cameron Mukherjee by a score of one up in yesterday afternoon’s final.

Having qualified in nineteenth from the strokeplay stages, Laird battled well through the matchplay rounds racking up a series of impressive wins including a last-16 victory against Niall Shiels Donegan.

Mukherjee, who won the 2021 Scottish Boy’s Under 14 Open title, took an early advantage in the final winning the first, but Laird his straight back to even things up at the second.

Over the next eight holes, every hole was halved apart from the seventh which saw Mukherjee hold a one up lead with eight to play.

However, it was the stretch from eleven to fourteen that would prove decisive, with Laird winning three of those holes to go ahead in the match for the first time, taking a two-hole lead to the fifteenth tee.

After halves on the next two holes, Mukherjee managed to take the match down the last by winning the seventeenth, but Laird held his nerve to claim the title.

Speaking to Scottish Golf after lifting the trophy, a delighted Laird said, ‘It feels surreal just now, I wasn’t expecting anything going into the week so coming out with the trophy is just amazing really.

‘It’s been a tough week. The conditions we’ve had and the intensity of playing two rounds every day for the last three days as well as the games I’ve had which have been tough.

‘First match today I played solid against Ross, I think I was two or three under. In the final I got off to a shaky start but pulled it back in the mid-part of the round and closed it out at the end.

‘This achievement ranks number one for me, it’s not even close. The course at Edzell has been good all week, greens have been good – fast and true, it’s been in great nick.’

Over the opening five holes of the final, the game was back and forward with both players winning two holes each and only halving the third.

As the players reached the turn, Constable won the ninth to take a one hole lead on to the back nine, but Tan hit back to level the match on the 11th.

It was the stretch from twelve to sixteen that would prove decisive however, with Constable winning four of those five holes to secure a 3&2 win.

Having qualified in tenth from the strokeplay stage, Constable overcame some very tough matches to reach the final, including beating Katie Graham and Freya Russell.

Speaking to Scottish Golf, an ecstatic Constable said, ‘It feels surreal, it’s not quite set in yet, I guess the adrenaline is still going from the match but I’m really grateful to have won it.

‘I was just happy to be there in the final, so I was trying not to think about what it was. Emily is quite a good friend, so I was just chatting to her and not thinking about it being the final.

‘I’m heading to America in less than a month for college so I guess my goal is just to keep playing as well as I can there, get a degree and see how far my golf can go.’

In the nett event, where the players with the next sixteen best nett scores after the top sixteen gross scores qualified, it was Nairn Dunbar’s Kaci Robertson who came out on top, winning the final by a score of 2&1 against Paisley’s Katie Dunne.

It was a stunning comeback from Robertson who found herself four down after four, before winning six holes out of seven from the eighth to turn the match round. Halves on the next three holes were enough to ensure she was crowned the nett winner.