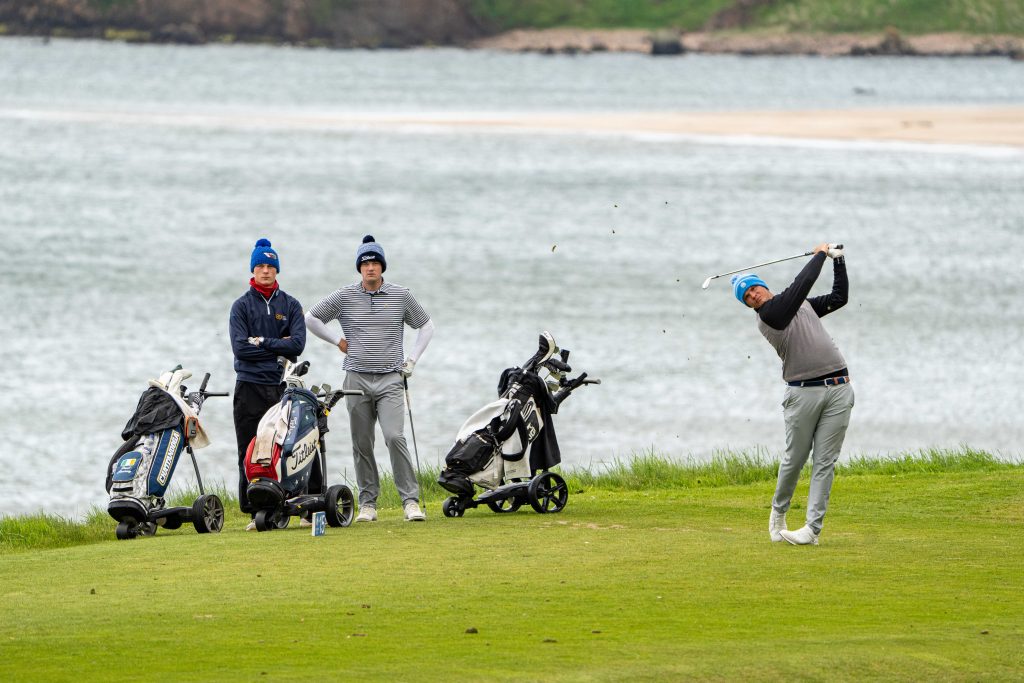 Charlie Thornton came out on top in tough conditions at Cruden Bay Golf Club to claim the title of 2022 Scottish Men’s Open Champion courtesy of a flawless final round of 66 (-4).

Heading into Sunday’s final 36 holes after the cut, Thornton – of Fulford Golf Club in Yorkshire – was tied second with Oliver Mukherjee of Scotland, and Tyler Duncan of Australia on level par after round 2, trailing Casey Jarvis by four.

For much of the morning round on Sunday, it was South Africa’s Jarvis who led the way.  Sitting on -4 after eight holes, his challenge was derailed by a poor stretch of four holes in the middle of the round which saw him drop nine shots to fall out of contention.

By the end of round 3, eventual winner Thornton had climbed to second on 2-over thanks to two birdies in his final four holes. The lead heading into the final round was held by John Gough of Beaconsfield on -1 after an excellent third round of 67 (-3).

Conditions became tougher as Sunday went on, with winds picking up in the afternoon.

Thornton made an excellent start to his final round, carding three birdies and six pars to reach the turn in 33. However, Gough maintained his narrow lead heading into the final nine, reaching the turn on 35 to sit on -2 overall and one shot clear.

The 15th hole proved to be decisive. With Gough still one shot clear he bogied while Thornton fired a crucial birdie to see the lead change hands for a final time.

With both players parring the final three holes, Thornton’s birdie on 15 meant he would be crowned 2022 champion.

Speaking at Cruden Bay, a delighted Thornton said, ‘Coming into the day I had no expectations with the weather – and around this golf course anything can happen so you’ve just got to play well. This morning I just didn’t get the putts to drop, then I went out this afternoon with John [Gough] and we were bouncing off each other a little bit. I was looking at the leaderboard and it felt almost like a matchplay situation on the last four or five holes.

I don’t normally get excited about golf courses but (because of the) quality of the green, I’ve been really excited about playing Cruden Bay. It’s tough, but scoreable as well. There’s a few driveable par fours out there, so it’s good fun to play. I’ve just been looking at the trophy, and I’ve seen a lot of names that I recognise from on tour, so I’m really happy about winning.’

Runner-up Gough will also be proud of his efforts finishing with a solid round of 70 that may have been enough to see him come out on top on another day.

In third place and winning the bronze medal on countback for best last round, was Hugh Foley. Foley’s last round saw him come in at 2-under, with four birdies and a score of 68.

Notable performances from Scots in the field came for Ben Murray of Portlethen, who couldn’t quite find his form again after a solid 68 in the first round. Rory Franssen and Andrew Davidson seemed to struggle at the start, but fired final round scores of 68 and 69 respectively, with ten birdies between them to see them both post top-ten finishes.

Oliver Mukherjees early promise didn’t bear out, and a series of bogeys in the third and fourth rounds ended his chances of lifting the trophy.