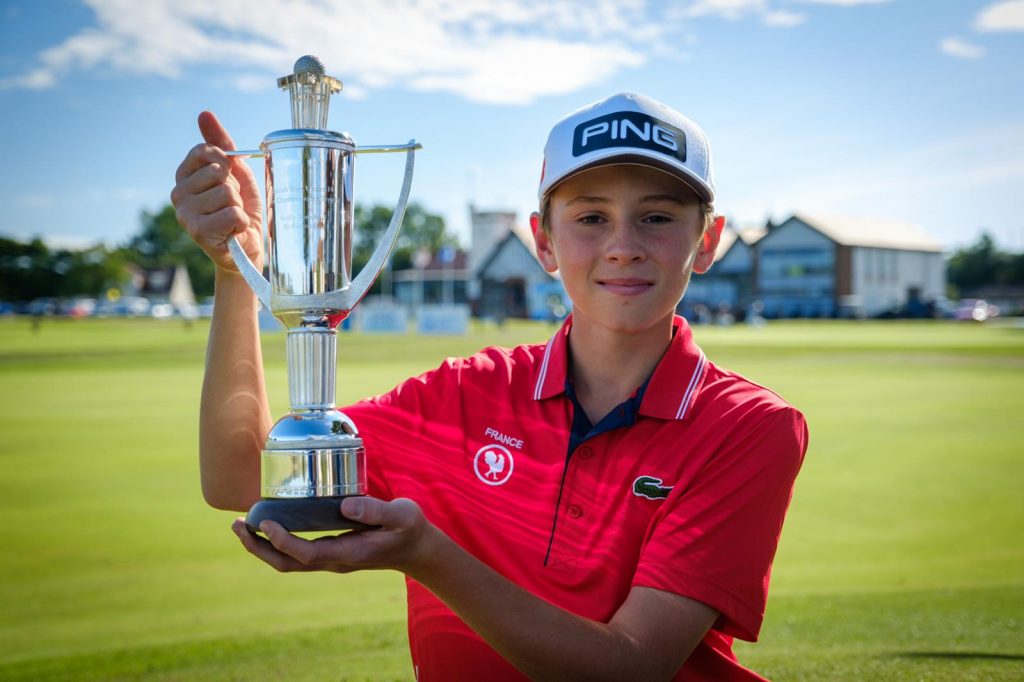 With more than 150 young golfers competing, there were exciting finishes to the Scottish Boys’ Under 14 Open and Scottish Girls’ Under 16/ Under 14 Open as the winners were crowned in near perfect conditions.

In the Scottish Boys’ Under 14 Open, a stunning final round of 66 saw France’s Tom De Herrypon claim a one-shot victory at Troon Darley.

After an opening round of 75 (+4), Herrypon got off to a blistering start on Monday, eagling the first and following that up with three consecutive birdies to get to one-under par for the tournament, and five-under for his round after just four holes.

After the fast start, Herrypon’s round steadied a bit, making twelve pars, one birdie and one bogey on his remaining fourteen holes to post the winning score.

Herrypon finished one shot clear of England’s Harry Thomas who posted the lowest round of the tournament, 65 (-6) which included eight birdies.  Thomas finished about an hour ahead of the eventual winner and despite his best efforts, finished one shot behind.

Speaking to Scottish Golf, Herrypon said, ‘I’m so happy to win this tournament. This course is very difficult, and it was also very windy. I enjoyed today and felt relaxed, my goal was to score under-par and I did that. I started the round eagle, birdie, birdie, birdie which was a really good start, and it was great to get the win. It was great to have the rest of the team here to support me as well.

In the under-12 section, West Links Junior Golf Club’s Ryan Killorn was the winner, finishing one shot clear of Gullane’s Fraser Walter.

A full list of scores from the Scottish Boys’ Under 14 Open is available here.

At Forfar Golf Club, it was Scotland’s Freya Russell who came out on top in the under 16 section of the Scottish Girls’ Under16/Under 14 Open.

Having shot a level par round of 72 on Sunday, Royal Troon member Russell followed that up with another round of level par on Monday which was enough to seal a four-shot victory over England’s Isabella Taylor-Stokes.

Russell’s final round got off to a shaky start, making two bogeys in her opening four holes, but three birdies in the middle of her round saw here get to one-under par with six holes to go. Despite a bogey on the 17th, Russell’s five pars on the rest of the closing stretch were enough to see her claim victory.

After lifting the trophy, Russell told Scottish Golf, ‘It’s such an honour to be under 16 champion, it was one of my goals this year and I’m really pleased to have won it.

‘I felt I had a good chance heading into the week, but just took it each hole at a time to see where it got me and thankfully it got me the trophy.

‘I didn’t realise I’d won until I got into the cabin, so it was a nice way to finish the day! In the middle of the round, I had some birdies and that was important.

‘This achievement is definitely up there for me; it was my last year of playing in the tournament, so it was good win.

‘It’s really nice to get the win on Scottish soil being a home player this week. Forfar has been a great course; I’ve played it a couple of times before and I love it.’

In the under 14 section, France’s Celeste Bobo Lloret produced a great performance to finish four-under par for the tournament, three shots clear of runner-up Romane Poissonnier.

Lloret opened her tournament with an excellent round of 70 (-2) and followed that up on Monday with the same again.

Lloret’s final round included six birdies, including two in her final seven holes.

Speaking to Scottish Golf, LLoret said, ‘I’m very happy to win to Scotland, it has been a great experience for me and an honour. It’s my biggest tournament win yet.

‘In the beginning I was pretty nervous, but I started playing well and that gave me confidence. It was important for me to stay calm the last three holes and not think about anything else but my game.

‘The course was perfect this week, the greens were amazing. It has been a great experience playing in Scotland, I’ve had a great week being here with my team and friends.’

In the under 12 section, Ffion Richardson from Mendip Golf Club in England was the winner, finishing three shots clear of Kankawee Linjongsubongkot.

A full list of scores from the Scottish Girls’ Under 16/ Under 14 Open can be found here.