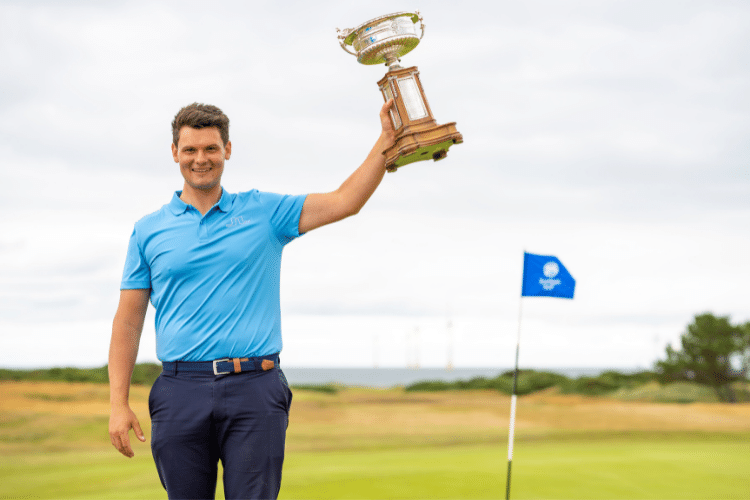 Angus Carrick followed in his father’s footsteps when he beat Connor Wilson by two holes in the final of the 2021 Scottish Men’s Amateur Championship at Murcar Links in Aberdeen.

With former Walker Cup player David watching on, 27-year-old Carrick won the second but soon found himself two down when Wilson won the fourth, sixth and seventh. Carrick pulled one hole back on the eighth but it was not until he claimed both the 13th and 14th that he edged in front again and not until a closing birdie on the 18th that his victory was finally secured.

“I’m absolutely speechless, it’s all been a blur,” said the new champion. “In fact, I’m still not sure what’s actually happened.

“I knew my game was good enough to compete and to win so I went out and gave it my all.

“It was a really tough game. We both hit some great shots and even after nine rounds of golf, or whatever it is, we were both playing very well. Yeah, there were a few tired swings in there, but not many. I think it was just the last six holes where I won it. I still can’t really remember what happened, but my caddie told me I had four birdies in the last six holes. So, I came back strong and ultimately that’s what won it for me.

“It’s great to emulate dad,” he added. “and great that we’ve now both got our names on the trophy. It’s nice, really nice, that we’ll always have that to share.”

One of the first people to congratulate the new champion was his father.

“I’m immensely proud of him”, Carrick Snr said. “He played great golf the last four rounds and thoroughly deserved to win. I’m delighted now to be known as Angus Carrick’s father, rather than Angus being my son. It’s a fantastic result.”

“It’s always hard to lose in a final,” said Wilson. “Coming second isn’t great initially, but when you look back at the week I’ve had, it’s been pretty good.

“I hit the ball great, I’ve hit the ball great all week, to be honest. But there were a few mistakes that crept in and they were costly. Angus is a great player and he didn’t give anything away. It wasn’t as if either of us was ever going to run away with it, that’s for sure.”

In the semi-finals Carrick came from two down to with two to play to beat Connor Graham from Blairgowrie, who, at the age of 14, was bidding to become the youngest ever winner of the Championship.

For a while it looked as if the youngster would extend his improbable tilt at the title but Carrick won both the 17th and 18th to come back from two down with two to play and then claimed his own place in the final by winning on the first extra hole.

“It was some match in the end,” he said. “Credit to Connor, he’s a great player. He’s done tremendously well this week. It was a tough game. I didn’t have my top stuff but somehow I managed to scrape through in the end.”

20-year-old Wilson was never behind in the other semi-final against 23-year-old Andrew Ni from Murrayfield Golf Club in Edinburgh. The Castle Park player won the fifth and the sixth before Ni pegged one hole back with a win on the 11th but Wilson then claimed four holes in a row from the 12th to complete an impressive 4 & 3 victory.

“It’s been a great experience playing against all these great golfers,” said the vanquished Ni. “It was tough out there. Connor played some great golf today and I didn’t do quite enough.

“He was very steady. I think I counted he was, three, four or five under, something like that. That’s good golf no matter what course you happen to be playing, but round here it’s phenomenal.

“The conditions were tough. He didn’t make any mistakes which is what you have to do in match play. I made a couple and that’s the game right there.”