Burns Seeks a Slice of History 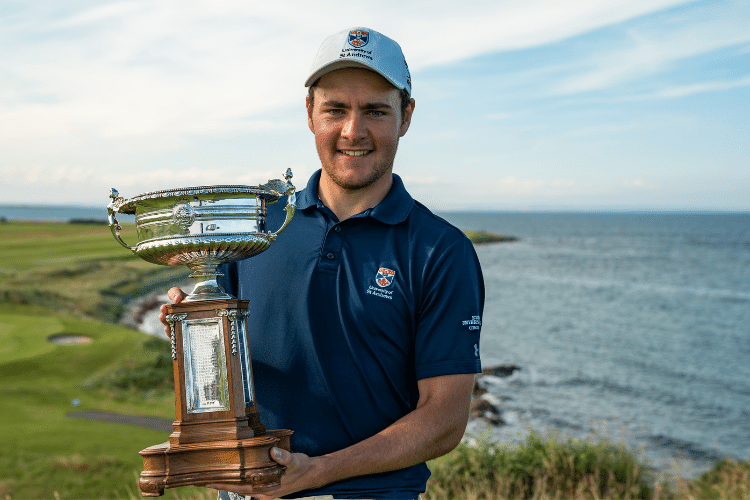 Crail’s George Burns will be bidding to become the first player for 38 years to win back-to-back Scottish Amateur titles when the eagerly-awaited 2021 Championship gets underway at Murcar Links and Portlethen on Tuesday 27 July.

Burns beat Kirkhill’s Lewis Irvine on the 19th hole of the 2019 final at his home club and, after the 2020 championship was cancelled because of Covid-19, is now bidding to become the first player to successfully defend the title since the legendary Charlie Green all the way back in 1983.

The Fifer has a formidable task on his hands because the championship has attracted virtually all of Scotland’s top men’s amateur golfers.

Irvine returns to see if he can go one better than two years ago while 2016 champion George Duncan, from Windyhill, is also in the field. There is an almost full complement of players from Scottish Golf’s Men’s Performance Programme while the younger brigade is headed by new national Boys’ champion Archie Finnie (Royal Burgess Golfing Society) and runner-up Ross Laird (Glenbervie) who met in the final of last week’s Scottish Boys’ Championship at Bruntsfield Links.

The quality of the field is confirmed by glancing at the handicaps of some of the leading contenders for the title. Darren Howie from Peebles, Eric McIntosh from Bruntsfield Links and Stuart Easton from Irvine Golf Club and Gregor Graham from Blairgowrie all have a playing handicap of +6. Stephen Roger (Peebles), Matthew Clark (Kilmacolm), M S S Smyth (Royal Troon), Jack Broun (Turnberry), Rory Franssen (Auchterarder) and last year’s runner up Irvine are off +5, while Connor Wilson (Castle Park) and Burns is part of the equally large group who currently have a playing handicap +4.

Also teeing it up is Auchterarder teenager Daniel Bullen, hot off his victory in the England North East Championship at Slaley Hall. Daniel was the Under-16 Champion and leading overall male player in this Faldo Series event, which also qualifies him for the Faldo Series Grand Final in the United Arab Emirates later this year.

Murcar Links and Portlethen are hosting the Scottish Men’s Amateur for the first time but both have previously staged other Scottish Golf events. Most recently Murcar Links was the venue for the 2016 Scottish Boys’ Amateur won by McIntosh after beating Irvine 2 & 1 in the final. It was also the scene of Tommy Fleetwood’s victory in the 2009 Scottish Men’s Open.

Murcar Links is often talked about as one of the most under-rated links in Scotland and that is a description which will resonate with golfers who have played this gem in the past. Its original course was designed by Archie Simpson in 1909 with later refinements made by James Braid in the 1930s. It is situated on a classic stretch of linksland about 10-15 minutes north of the centre of Aberdeen and features undulating fairways hewn between massive sand dunes and protected by whins and heather.

1999 Open champion and proud Aberdonian Paul Lawrie once summed its charms up succinctly when he said Murcar’s 6,516-yard par 71 course “is as fine a links course as you could ever wish to play.”

Club members and officials at Murcar Links are all looking forward to hosting the championship.

“All of us at the club were delighted when we were first offered the opportunity to host the Scottish Amateur in 2020,” said Murcar Links Club Manager, George Bruce. “Obviously, the times were such that did not happen, but it was a unanimous ‘yes’ when we asked to host the championship this year.

“The team here at Murcar Links have worked tirelessly in preparation for the event and we now look forward to welcoming all participants and wish them all the very best in their quest to be crowned as Scottish Amateur champion.”

Portlethen is very different to Murcar Links in that the club was founded as recently as 1981 and its 6,663-yard Donald Steel-designed course is a parkland course rather than a links. However, it is widely regarded as one of the finest inland courses in the North-East of Scotland and will provide a worthy test to competitors.

“We at Portlethen golf club are extremely proud of our facility and for us to be recognised by hosting such a prestigious event as the Scottish Men’s Amateur Championship is a tremendous testimony to how far the club has come in such a relatively short period of time,” said the club’s secretary, Dino Becci.

“As with the cream of the Scottish professional ranks who competed in last month’s Scottish PGA Northern Open, which we were also honoured to host, we very much look forward to giving a warm welcome to the best amateurs in the land.”

The championship begins with a 36-hole stroke play qualifier on Tuesday 27 and Wednesday 28 July. All competitors play one qualifying round at each venue with the leading 64 qualifiers progressing to the match play stage at Murcar Links on Thursday 29 July.

All Scottish Golf tournaments are currently being administered under strict safety guidelines. These guidelines have been reviewed regularly to ensure they align with up-to-date sportscotland, Scottish Government and Public Health safety requirements. More information about the current guidelines can be found here.

The acclaimed new Scottish Golf App will provide online hole-by-hole scores from both Murcar Links and Portlethen enabling family and friends to obtain live information on how competitors are faring.

The system will go live as soon as play gets underway at the two courses at 7.30 on Tuesday morning.