Bogey-Free Round Lands Easterbrook the Scottish Boys’ Under 16 Title 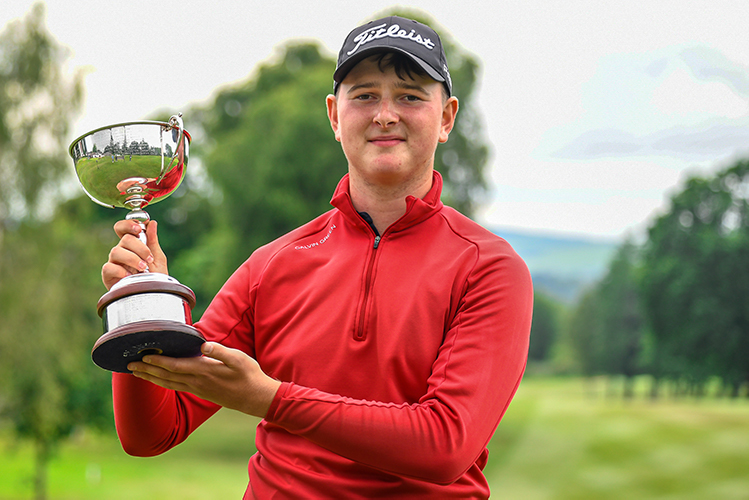 England’s Sam Easterbrook carded a superb four under par 65 to claim his first international title at the Scottish Boys’ Under 16 Championship at Dumfries & County.

Easterbrook, from the Wishaw Golf Club in Sutton Coldfield, started the final day three shots behind compatriot Josh Berry but quickly got into his stride with a birdie on the third and then carded three more coming home to finish the championship on six under par 201 and become the first Englishman to lift the trophy since Mikhail Ishaq at The Glen back in 2008.

“It’s great,” he said. “I played so solid all day. Starting three shots back I didn’t know if I could win. I just wanted to shoot a low score and fortunately, everything fell into place.

“The birdie at the third got me off to a good start and after that, I sort of hung in and holed some key putts.

“I made the birdies when I had the chances and that made all the difference.

“The course has been great and the greens are unbelievable so a massive thanks to Dumfries & County. It’s been a great week.

“This is definitely the biggest win of my career to date,” he added. “I’ve never done great in a national event before so this is a nice change and gives me some momentum going into the McGregor Trophy (English Boys’ Under 16 Open Amateur Stroke Play Championship) and the Carris Trophy (English Boys’ Open Amateur Stroke Play Championship) in the next two weeks.

This year’s championship proved to be a big success for the strong English contingent in the field. Freddie Turnell also closed with a 65 to move up into a share of second place with 36-hole leader Berry on four under par 203.

Berry dropped three shots to par on the 10th and 11th but closed with a birdie three to post a round of one over par 70.

Two other Englishmen Louie Walsh and Oscar Lent carded rounds of 68 to finish tied fourth on 205 while the leading Scot in the field was Niall Shiels Donegan who carded a closing 72 to finish sixth on 206 a single shot ahead of a sixth Englishman Jake Antoun who had been tied second overnight but slipped down the field with a final round 73.

The Californian-based Shiels Donegan now travels to Edinburgh for next week’s Scottish Boys’ Championship at Bruntsfield Links where one of the favourites will be current Scottish Boys’ Order of Merit leader Connor Graham.

him climb up the leaderboard into a share of eighth place alongside Ireland’s Michael Wilson and English pair Edward Davis and Hugh Adams on one over par 208.