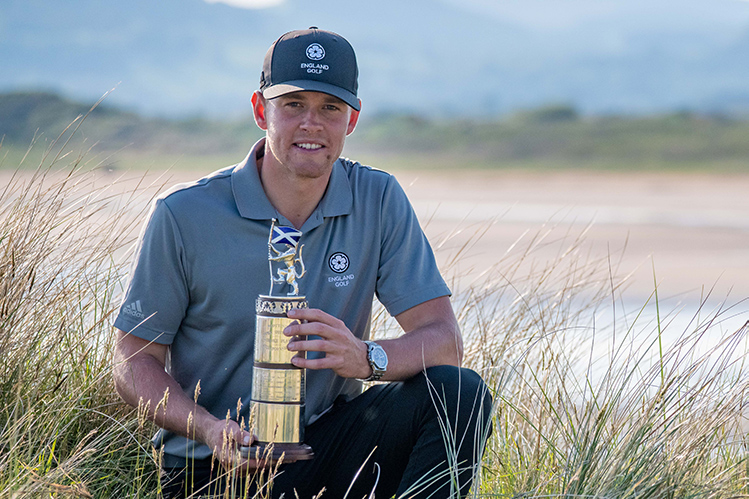 The former Manchester United youth team player carded a five under par 64 in the third round to open a two-shot lead over compatriot and nearest challenger James Wilson but a two over par outward half of 37 saw his advantage cut to one shot before birdies on the 12th, 13th 15th and 17th helped him to close with a two under par 67 and finish on 15-under par 261.

Wilson also finished strongly birdies on the 17th and 18th but was only enough to shoot 68 and finish three shots adrift of Barrow on twelve under par 264.

The win makes Barrow the second successive Englishman to lift the trophy after Walker Cup player Jake Bolton completed a single shot victory over compatriot Sam Bairstow at The Duke’s, St Andrews, in 2019.

Last year’s championship was cancelled because of the COVID-19 pandemic.

“It feels amazing. It’s been a good few years so to finally get a big win is amazing,” said the new champion. “We couldn’t have asked for three better days of weather and luckily I performed pretty well.

“The last three days have been incredible. My game’s been pretty solid. The putter has probably been the hottest thing in the bag which was needed round here. The course was in great condition, but the greens were getting really firm and fast towards the end. It was tough even though the weather was pretty kind to us.

“I’ve been told that guys like Tommy Fleetwood and Andy Sullivan have got their names on this trophy. I wouldn’t mind doing what they are doing now.”

The leading Scot in the field was Irvine’s Stuart Easton who held a one-shot lead over Barrow at the halfway stage but could not quite replicate the form which saw him fire rounds of 63 and 66 over the first two days. He went on to card two rounds of 70 to drop back into third place on seven-under par 269.

“I’ve got mixed emotions,” Easton admitted. “I didn’t have my best stuff today but that’s golf. I hit the ball pretty well but the putter went a little bit cold.

“I can’t complain. I’ve been outplayed by two guys who played some really great golf. You have to take your hat off to them. Congratulations to Callan and James.

“It was great to play in the final group today,” he added. “That’s what you practise for. That’s where you want to be. You want to be in contention and be playing against the players that are playing well.”

The best golf on the final day came from Kirkhill’s Lewis Irvine who was eleven shots off the pace after two opening rounds of 70 but then carded a 64 and a 66 to move up into a share of fourth place alongside English international Haider Hussain on six under par 270.

That left that duo a single shot ahead of 2019 runner-up Bairstow (Hallowes) who carded two closing rounds of 68 to finish fifth on 271 and two in front of another Englishman Zachary Chegwidden (Orsett), Scotsmen Stephen Roger (Peebles) and Jack Broun (Turnberry) and Welshman Matt Roberts (Royal Porthcawl) who were tied for sixth.

It was also a day to remember for The Kendalshire’s Joe Harvey who fired his first competitive hole-in-one on the par three 17th on his way to shooting a 66 in the third round.

“It was 168-yards into the wind,” he said. “I wasn’t sure if a six would go long so I decided to hit a high cut. I flushed it straight at the flag and it took one bounce and went straight in.

“I was buzzing with that,” he added. “I’d had two prior to that but that’s the first one in a tournament. I played great for the first 14 holes but didn’t really have anything going my way but then after dropping a shot at 15 I finished birdie, eagle, birdie which just shows you have to stay patient and keep trusting what you’re doing.”

Harvey went on to post a closing 72 to finish alone in eleventh place on two-under par 274.