ASI Scottish Open gives back through Golf for Good 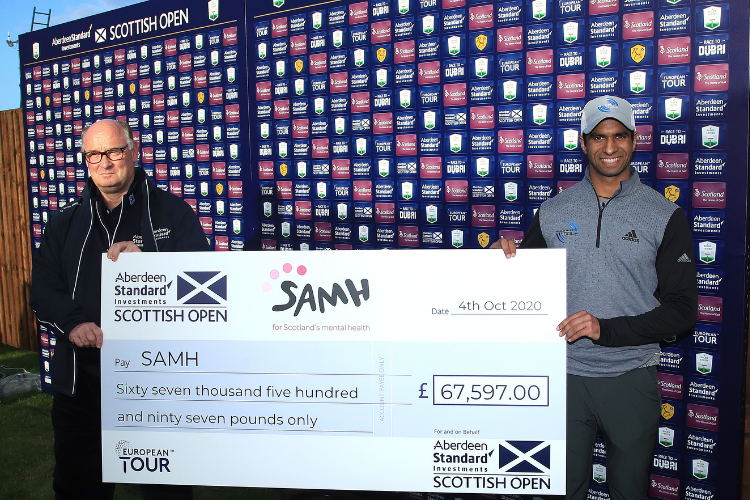 A total of £67,597 was raised for SAMH (Scottish Association for Mental Health), as the European Tour’s Golf For Good initiative continued at the Aberdeen Standard Investments Scottish Open, with golf fans still able to add to the total by bidding for some of the incredible prizes and experiences on offer through the online auction at Et.golf/ASISOAuction

Tournament sponsor Aberdeen Standard Investments, through their Charitable Foundation, donated £8,000 as part of their annual birdie and eagle pledge over the four days of competition at The Renaissance Club. The European Tour matched that figure, as well as honouring a pledge to donate all ticket revenue from the original plan to allow 650 spectators on site on both Saturday and Sunday. With the planned pilot spectator initiative no longer able to go ahead, the European Tour also donated the equivalent sum of £10,330.00 to the fundraising total.

Host venue The Renaissance Club put forward a prize of £25,000 for the first hole-in-one scored on the 12th hole, and although there were no hole outs during the tournament, the owners of the East Lothian venue have donated the sum to the overall tally.

There is a further opportunity to donate to SAMH through an online auction hosted by The Renaissance Club. With reserve prices of £16,267 on the auction items taking the fundraising total to £67,597, the auction is still open with golf fans able to bid on prizes including a pro-am team at the 2021 Aberdeen Standard Investments Scottish Open and a round of golf with Scottish star Robert MacIntyre at Et.golf/ASISOAuction

The second Rolex Series event of the 2020 Race to Dubai also saw the launch of #Medals4Heroes, a mini-medal competition that pairs everyday heroes of the Covid-19 pandemic with professionals. Major winners Paul Lawrie and Danny Willett helped to tee off the initiative when they teamed up with Lorne Logan, an occupational therapist from Edinburgh and David Martin, a community fundraiser and performer from Tranent in East Lothian, to play nine holes on the Tuesday of tournament week.

In addition to the charitable activities onsite at the Aberdeen Standard Investments Scottish Open, 1000 Callaway range balls from the tournament will be donated between the Stephen Gallacher Foundation and RNJ – The Gift Of Golf Foundation.

Rory Colville, Aberdeen Standard Investments Scottish Open Championship Director, said: “It’s important to the European Tour, tournament partners Aberdeen Standard Investments and VisitScotland, and the venue, The Renaissance Club, that the tournament has a positive impact on the local community, and collectively we are delighted to be able to help SAMH with their fundraising efforts as well as thanking local heroes Lorne Logan and David Martin. In these incredibly difficult times, the work that SAMH carries out to provide mental health support has never been more important, and they were the unanimous choice as Official Charity Partner this year.”

Fiona Lewis, Corporate Partnerships Manager at SAMH, said: “A massive thank you to Aberdeen Standard Investments Scottish Open – not only have they raised a fantastic amount of money, but they’ve also helped to raise awareness on the issue of mental wellbeing.

“We’re living in difficult times so it’s never been more important to support Scotland’s mental health. These funds will help SAMH raise awareness, promote good mental health and support those in who need it most.”

Jerry Sarvadi, Founder/Chief Executive of The Renaissance Club, added: “We’re delighted to be able to support the important work that SAMH carries out in mental health support, social care and education across Scotland. It is important for us to give back to the local community, and with the support shown from Aberdeen Standard Investments and the European Tour, we hope this is positive step for many of those who have been suffering during these unprecedented times.”

The ‘Golf for Good’ initiative aims to give back in three key areas:

▪ supporting the communities where the European Tour plays;

▪ rewarding the true heroes, such as front-line workers; and

▪ promoting the many health benefits that golf offers.

With four different routes, you are bound to find the perfect challenge;

To find out more and register for the event, visit samhstomp.org.uk

Calculating Your Handicap Index Under WHS

Why We Are Moving to a New Handicap System