All Eyes are on Eyemouth for Medal Finals South | Scottish Golf

All Eyes are on Eyemouth for Medal Finals South 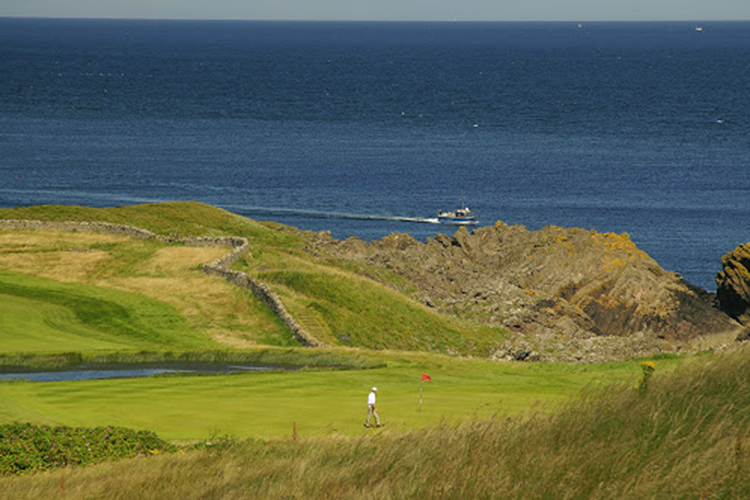 This Friday (July 2) one of the most spectacular courses in Scotland will be in the spotlight when Eyemouth hosts Scottish Golf’s Medal Finals South.

It is the fifth of six regional qualifiers for the hugely successful Medal Finals competition and as at the previous four events at Craigmillar Park, Williamwood, Murrayshall and Pitlochry the top six men and top six women with the best net scores over 18 holes of stroke play will progress to the Scottish Medal Finals Grand Final to be played at the Duke’s, St Andrews, on Sunday 15 August.

Eyemouth Golf Club is perched on top of Gunsgreen Hill and enjoys stunning views over the picturesque fishing town of Eyemouth and the rugged East Berwickshire coastline.

Its 6,404-yard course has many distinctive features not least its 167-yard par-three sixth hole which was once voted as Britain’s No. 1 Most Extraordinary Golf Hole and in 2015 was selected by Visit Scotland as one of the Top 18 Holes in Scottish Golf.

That treacherous hole short hole with its carry over a rocky inlet is worth a visit alone but it is by no means the only hole that will stick in the mind. There is also the 13th which is called “the Hawkness Monster” and at 656-yards of the tiger tee is the longest hole in mainland Scotland as well as a fine selection testing par fours.

This year’s Scottish Medal Finals South marks the fourth time in a little over ten years that Eyemouth has hosted a Scottish Golf event. It was the venue for the 2010 Scottish Girls Championship won by Leslie Aitkins and has since also staged the Belhaven Scottish Club Handicap Regional Finals in 2012 and a Scottish Hydro Highland Scramble qualifying event two years later.

“Competitors at the Scottish Medal Finals South are in for a treat,” confirmed Fraser Munro, Scottish Golf’s Head of Events. “It is a terrific test of golf and enjoys some truly exceptional views along one of the most spectacular coastlines in Scotland.

The new Scottish Medal Finals competition was originally scheduled to be played for the first time in 2020 but had to be postponed because of the Covid pandemic. The lingering effects of the virus mean all this year’s events must be administered under strict safety guidelines. These guidelines are reviewed regularly to ensure they align with up-to-date sportscotland, Scottish Government and Public Health safety requirements.

The tournament is also a ground-breaker because for the first time all scores are registered using the new Scottish Golf App which provides online hole-by-hole scores enabling family and friends to obtain live information on how competitors are faring.

The final Central 2 Regional Final is to be played at Balbirnie Park on Friday 23 July. By the end of that event, a total of 36 men and the same number of women will have qualified for the inaugural Grand Final at The Duke’s on 15 August.