Berry Out In Front After Dramatic Day At Dumfries & County 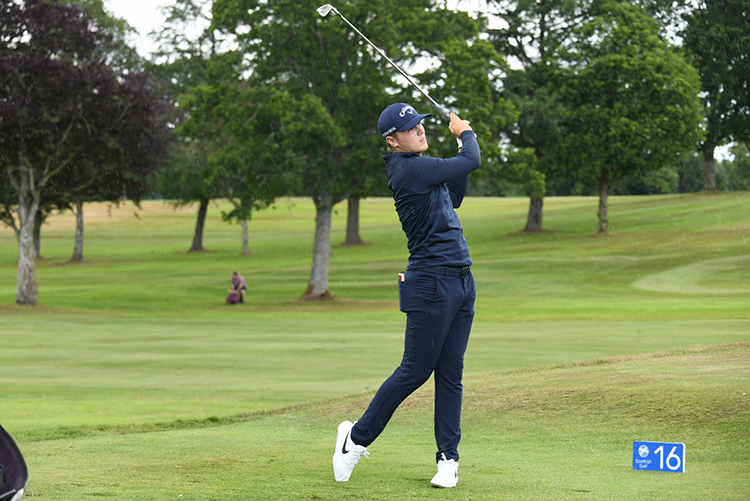 English international Josh Berry holds a slender one shot lead heading into the final round of the Scottish Boys’ Under 16 Championship at Dumfries and Country.

The Doncaster teenager added a level par 69 to his opening 64 to claim the early clubhouse on five under par 133 but then had to wait until late into the evening to see if anyone would catch him after thunder and lightning caused play to be postponed for over two hours early in the afternoon.

He was briefly overtaken after the break by fellow Englishman Jake Antoun who got it to seven under par after ten holes of his second round but bogeys on the 13th, 17th and 18th saw him also post a 69 and drop into a share of second place alongside Scotland’s Niall Shiels Donegan on four under par 134.

A third Englishman Sam Easterbrook goes into the final round tied with Scotland’s Harry Bent on two under par 136 after firing a fine three under par 66 but he was also left ruing an untidy finish in which he dropped two shots at his closing hole.

A total of ten players will go into the closing round within four shots of the lead. England’s Louie Walsh also carded a 66 to climb up into a share of sixth place alongside compatriot Oscar Lent and Scotland’s Sam Mukherjee while a 66 from England’s Freddie Turnell helped him to climb up to ninth alongside compatriot Hugh Adams. Adams won the 2019 Scottish Under 14 Championship and is bidding to become just the second player to win Scottish Boys’ titles at both Under 14 and Under 16 level.

Berry had been a picture of consistency during his opening round but was rather less so in his second in which he carded an eagle and four birdies but also two bogeys and two double bogeys.

Two of those bogeys came in the closing stretch but he was happy with his ball striking and with the position he found himself in.

“I played much the same as yesterday,” he said. “I had just as many chances but didn’t capitalise on them quite as well.

“The plan tomorrow is to try to keep giving myself chances and see what happens. The course is great. The greens are really good so you do have the chance to shoot low scores.

Antoun was equally upbeat at the end of what had been a long day for the majority of the field.

“It was fun,” he said. “I played some really good stuff. From one to about 14 I was really solid although my putting saved me a couple of times.
“The finish was a bit disappointing because I wasn’t driving very well but overall I’m pretty happy with it.

“The two hour delay was strange,” he admitted. “I’ve never really been in that position before but I decided to go back to my hotel and kind of restart my day. I did everything I did in the morning and came back feeling fresh which helps.

“Tomorrow I’m just going to try to play like I did early on in today’s round. I just need to sort my driving out. If I can do that I’ll be in pretty good shape.”

The cut fell at 11 over par 149 with a total of 62 players progressing to the final round.