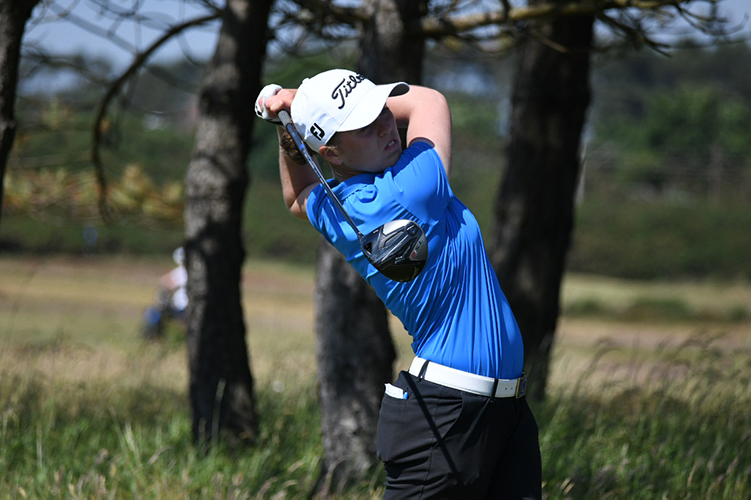 Scotland’s Hannah Darling holds a one-shot lead over three of her compatriots after a dramatic first round of the Helen Holm Scottish Women’s Open at Royal Troon Portland Course.

The GB & I Curtis Cup squad member from Broomieknowe carded a five under par 67 to overhaul new British champion, Louise Duncan, Scottish Women’s Amateur Champion Chloe Goadby and Jasmine MacKintosh from Murcar Links at the top of the leaderboard near the end of an opening day during which the sun shone throughout and no less than 25 players beat or matched par.

It was also a good day for local Royal Troon member Hazel MacGarvie who carded a three under par 69 to share fifth place with Northern Ireland’s Jessica Ross and England’s Rosie Belsham.

Australia’s Kirsten Rudgeley arrived in Scotland having amassed three wins and three second place finishes on her home circuit since December and she maintained that sort of form with a two-under par 70 which was enough for her to tie for ninth place alongside England’s Charlotte Heath. Heath also has an Australian connection in that she won their 2020 Women’s national title at the Royal Queensland Golf Club.

On a fine day for the Scots Clara Young, Tara Mactaggart and Shannon McWilliam all go into the second round in a share of eleventh place on 71 alongside England’s Amelia Williamson, Bel Wardle and Libby Bell and Welsh representative Gracie Mayo.

Her opening round could not be described as consistent but an eagle, five birdies and four bogeys meant she boarded the final tee at three under par and a second eagle there saw her leapfrog her three compatriots.

“I didn’t get off to the best of starts,” she admitted. “I was a bit up and down but I stayed patient and took advantage of the reachable par fives on the back nine. It’s hot out here for Scotland so it was a good day to play well.

“I stuck it close in two on both the 11th and the 18th and took advantage with the eagle putts. The one on the 18th was a nice way to finish the round.

It’s great to see the other Scots play well. We’re going to be playing together for Scotland at the European Amateur Team Championships so I want them to do well but I also want to try to beat them this week. It makes for an exciting week.”

Duncan has had little time to relax since winning the Women’s Amateur title at Kilmarnock (Barassie) and admitted to being a bit anxious about teeing up for the first time as the British champion.

She was two -over par after four holes but soon got into her stride and birdies at the eighth, 10th, 11th 12th, 16th and 18th saw her clinch the early clubhouse lead.

“It has been a wee bit crazy,” she said. “There’s been loads of things happening so I was looking forward to starting today and to see how I was going to play. I was really nervous going down the first which is unusual for me but I enjoyed it.

“It was a bit strange. I’ve not really been in this position before. I didn’t know how I was going to perform so I’m happy with four under. I couldn’t have been much better, to be honest.”

Goadby won the Scottish Women’s Amateur title at Gullane at the start of the month and she is on course to claim a national double after a fine round in which she was also briefly over par with a bogey on the sixth but then bounced back with birdies at the 7th, 9th, 11th, 15th and 18th.

“I’m happy with my round today,” she said. “It’s nice to get a good round in to start with. I didn’t make too many mistakes so hopefully I can build on that during the rest of the week.

“It was a bit of a whirlwind going straight to the British after winning the Scottish. After that much golf over those two weeks it was time for a bit of a rest so I’ve just been doing a bit of practice here and there. I’m happy with how it’s going. There’s still a lot to work on but hopefully I can keep showing some good form.

It’s great to see Hannah, Louise and Jasmine also up there at the top of the leaderboard,” she added. “I was delighted for Louise after her win at the Women’s Am. It’s just all round great for Scottish golf to have so many players playing well at the moment. It’s really exciting for our team as a whole. It’s a product of all the hard work the last few years and it’s exciting heading into the European Team Championships next week.”